The World Junior Hockey Tournament: A Warehouse of Memories 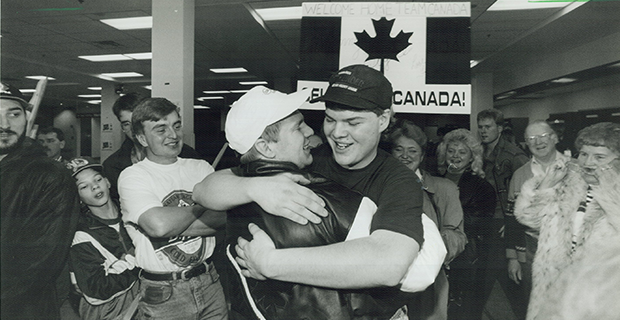 Goalie Manny Legace (left) is greeted by brother Chris at Pearson International Airport in a triumphant homecoming after helping Canada to World Junior Hockey Gold in 1993.

A 16-year-old Wayne Gretzky lighting it up in Montreal, leading the 1978 tournament in scoring with an amazing 17 points in six games.

John Slaney, firing home the "shot heard 'round the country", as Canada beat the Russians to claim gold in Saskatoon in 1991.

Jonathan Toews racking up a "shootout hat trick" in Sweden, leading the Canadian squad to a thrilling 2007 semifinal victory over their fierce rivals from the United States.

Depending on their birth certificate, Canadian hockey fans have different stories to tell when relaying their top memories of the IIHF World Junior Hockey Tournament. But one thing's for certain – they will have memories and they will definitely be special.

This year's World Junior event kicks off for Canada December 26th in Helsinki, Finland with a tough task right off the hop - a date against young phenom Auston Matthews and the high-flying Americans.

Matthews is widely expected to go first overall in the 2016 NHL draft and is being mentioned in the same "generational player" category as Connor McDavid, who helped Canada strike gold at last year's tournament in Toronto and Montreal.

Tom Renney is the President of Hockey Canada, a former Canadian World Junior coach himself, and he gives the NHL a big assist when it comes to the increasing skill level at the World Junior event.

"When the NHL'ers started to go to the Olympics in 1998, everybody started to see the importance of putting strong, skilled and fast teams on the ice," said Renney. "That seems to be the blue print for success now. When we put our teams together, for instance, we like to throw as much skill as possible on the ice and then challenge the other countries to see if they can come and beat us."

It's a formula that has worked wonders for the Canadian Juniors, a program that boasts two incredible streaks of five straight gold medals (1993-1997 and 2005-2009). In the last five years, however, five different nations have struck gold; something Renney feels has served to boost the tournament's popularity, despite the fact it's getting tougher and tougher for Canada to win.

"With the increased competition, the big thing for Canada is to make sure we're in the hunt every year because we never want to be in a situation where we're not battling for a playoff spot," explained Renney.  "But when different federations are winning, that's special stuff and it really helps grow the game on the world stage."

When it comes to the growth of the World Junior Tournament, TSN also deserves a huge assist. The network has done a bang-up job televising the event over the years and, for the first time ever, is carrying every single game from this year's event in Helsinki.

Bob MacKenzie has been on the World Junior beat for TSN since they first produced the event in 1991, (The Saskatoon tourney that featured the famous Slaney goal, something MacKenzie calls the "TSN Turning Point" in terms of establishing the network as a broadcast force) and the Hockey Hall of Fame journalist has a warehouse of memories from the tournament.

"The Jordan Eberle goal in Ottawa was pretty special," said MacKenzie, recalling the semifinal life-saver against the Russians with five seconds left that helped Canada win its fifth consecutive gold medal in 2009. "But I also have a place in my heart for what Manny Legace did in 1993."

Legace was a young goalie who played for an OHL team that doesn't even exist anymore-the Niagara Falls Thunder. And while he went on to a middling career in the NHL, for a few weeks in '93, Legace became an all-time Canadian junior hockey legend.

"The host Swedish team was so good that year," remembered MacKenzie. "Peter Forsberg (who chalked up a tournament record 31 points in the '93 event) was absolutely amazing and ran the show. The Canadian squad had some talent with guys like Chris Pronger, Scott Niedermayer and Paul Kariya, but they were really young. But Legace stood on his head and the rest is history."

Yes, the history books show Legace putting up a perfect 6-0 record to lead Canada to a surprising gold, as he was named the top netminder in the tournament while boasting a sparkling 1.67 goals against average.

So, will we see another Manny Legace emerge in Helsinki, an unheralded youngster who rises up to carve out his own name on the world stage?

Well, one thing's for certain. MacKenzie says this year's tournament will be as competitive as ever.

"There's a reason we've had five different winners the last five years," Mackenzie explained. "Everybody's getting better and it's not by mistake. All the countries are doing a better job of developing their own talent pool. It used to be Canada and Russia would come in and absolutely dominate. But that's not the case anymore. You've got lots of good teams - the U.S., Finland, Sweden, the Czech Republic - and all of them are capable of stepping in and stealing Canada or Russia's lunch."

No matter who wears the World Junior crown this time around, the tournament is always a Holiday hockey feast for Canadians and the countdown to the Boxing Day special against the Americans is well underway.

From John Slaney and Manny Legace, to Jordan Eberle and Connor McDavid, the names of the young Canadian heroes change from year to year.

"The World Juniors is a fantastic tournament," said Renney, "and it's one of those events that I definitely feel will stand the test of time."