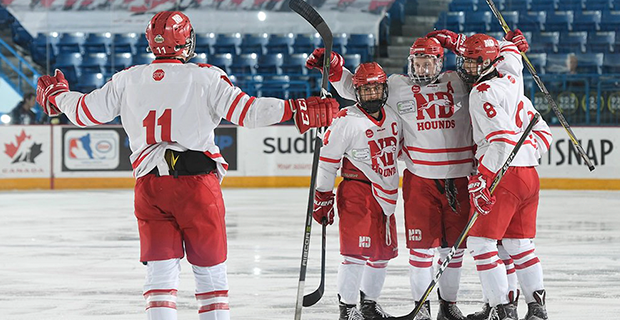 In Day 5 of the TELUS Cup, Saskatchewan's Notre Dame Hounds sit atop the standings, with four wins in as many games.

After four days of the TELUS Cup, contenders are starting to separate from pretenders.

The Notre Dame Hounds from Saskatchewan are alone atop the standing with a perfect 4-0, including a hard-fought 2-1 win over Lethbridge. They are first in both goals scored goals allowed.

Just behind the Hounds are the Lethbridge Hurricanes, who have two wins and a tie, alongside Quebec’s Magog with an identical record.

The Toronto Young Nationals have one win and one tie and are just two points behind Lethbridge and Magog for the third spot.

Moncton, in fourth with two points, have just one lone win which came against Sudbury and will need a big win and some luck to fall their way in hopes of getting to the knockout stage.

Just like in the Esso Cup, the host is having a rough go. Sudbury is 0-3-1 so far and likely eliminated from the knockout round. They managed to tie Magog Thursday night thanks to 38 saves from goalie Alex Vendette.

Magog’s Jeremy Rainville, a ninth round pick of Sherbrooke last year, led the way in scoring with five goals and seven points. The Hounds’ Luke Mylymok, a native of Boise, ID, and commit to Minnesota-Duluth, has three goals and six points through four games, tied for second in scoring with teammate Brad Morrissey.

Looking at the top 10 scorers, five come from Notre Dame and four from Magog. The lone player not from those two teams is 15-year-old Zack Stringer of Lethbridge, who has three goals in four games and is building his stock up for the WHL Draft next Thursday.

Lethbridge has a decision to make in net, as Byron Fancy has yet to allow a goal in one start and one relief appearance, while Carl Tetachuk has a solid .914 save percentage. The Hounds have also split goalie duties: Aaron Randazzo has a sparkling .955 save percentage while his counterpart Riley Kohonick is working at a .913 clip.

On Friday, Notre Dame looks to stay perfect against Moncton, Lethbridge and Magog will be playing for second place in the preliminary stage – a likely semifinal matchup. Host Sudbury will be hoping to pick up their first win by knocking off fellow provincial team Toronto, who in turn are looking to lock down a spot in the elimination stage.

The semifinals will be played Sunday, with first playing fourth and second playing third. On Sunday, the two finalists will play for gold on a nationally broadcasted game on TSN.