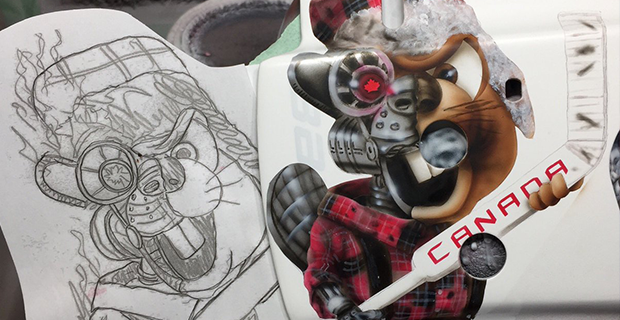 From drawing to helmet, a look at the work done on goalie Genevieve Lacasse’s lid by David Arrigo for the 2018 PyeongChang Winter Olympic Games. (Courtesy of David Arrigo Art)

The three goalies that are hoping to help Canada win their fifth-straight Olympic gold medal have unveiled the ultra-Canadian paint jobs on their helmets.

Shannon Szabados, who was in net for the last two Olympic gold medal games, showed her new lid earlier this month via social media.

The helmet was painted by artist Jason Bartziokas, who also has created the designs for Pittsburgh Penguins goalie Tristan Jerry, the Winnipeg Jets Eric Comrie and many other NHL, WHL and university goalies. Szabados’ helmet features snowflakes and maple leafs falling from the top of the helmet down to the chin, a group of kids playing on an outdoor rink on one side and huskies in the snow on the other.

At the 2014 Sochi Olympics Canada’s goaltending trio, Szabados, Charline Labonté and Genevieve Lacasse, created a ribbon-type infinity symbol with their numbers wrapped inside that represented their bond that they displayed on the back plate of their helmets.

Artist David Arrigo is the person behind goaltender Genevieve Lacasse’s helmet for the 2018 PyeongChang Winter Olympics. Even if it wasn’t emblazoned with the word ‘Canada’ from the forehead to the top of the helmet, there would be no question what country Lacasse plays for.

Arrigo said he was given the direction to have a beaver with a plaid shirt and suspenders on the mask. The pair continued to collaborate and the finished product is the “beavanator.” A cute beaver with a trapper hat and sporting a plaid jacket while carrying a goalie stick on one side and a cyborg version on the other side that appears to have a laser focus.

It is not the first time Lacasse has gone with iconic Canada animals on her helmet. At the Sochi 2014 Olympics, one side of her mask featured a cartoon Moose and the other a cartoon beaver (also in a plaid jacket).

Ann-Renée Desbiens also unveiled her helmet last week which was painted by artist of Sylvie Marsolais of Sylabrush whose clientele includes the Ottawa Senators Craig Anderson, Tampa Bay Lightning’s Andrei Vasilevskiy and his colour changing mask and many others high-calibre goalies.

On the backplate, Desbiens’s helmet features the parliament buildings in Ottawa and on the sides are the Calgary Tower, to represent Team Canada’s training grounds during centralization, and the Chateau Frontenac, designated a national historic site in 1980, representing Quebec and the goalie’s roots.

Olympic mask has also arrived in Calgary! Now officially all ready to head over to Korea! Thanks to @sylabrush for an amazing job!

Nicole Hensley, gold medal Women’s World Championship winner in 2016 and 2017, also went with Sylabrush for her helmet design which pairs nicely with her goalie pads.

The final piece of the puzzle is in! heart_eyesBig thank you to @Sylabrush for the incredible work! us #TeamUSA #12days pic.twitter.com/Ocsogoel8A

Maddie Rooney went with Miska Designs to create her helmet.

Other notable goalies are also giving a sneak peek at their helmets including Finland’s Noora Raty.

And, here is a cool design for Nana Fujimoto of Team Japan.

Back to Top
By Kristi Patton| January 29, 2018
Categories:  Female|Events