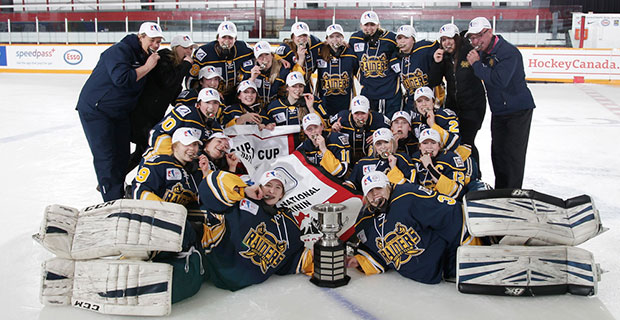 The 2017 Esso Cup has wrapped up with all of the hardware handed out to respective teams.

The bronze medal game had the Durham West Lightning and the host Pembina Valley Hawks squaring off a day after tough semifinal losses, both teams lost by one to St. Albert and Triolet in those games to put them in the bronze final. The Hawks not only had home ice advantage, but were victors in their only matchup through the tournament when they beat the Lightning 4-1 on the third day.

Lightning forward Brooklyn Donaldson opened the scoring just two and a half minutes into the first period to try and quiet the home crowd. The Hawks would strike back quickly in the second period when team point leader Makenzie McCallum broke free and scored a shorthanded goal on a partial breakaway to tie it one.

The trend of quick goals to begin the period would continue into the final frame when Chavonne Truter scored less than a minute into the period to take back the lead. This opened up the floodgates for the Lightning who picked up all of the momentum to close out the game. Truter would score her second of the game and third of the tournament eight minutes later to bring it to two goal-lead and Mackenzie MacDonald scored with five minutes left.

“Everyone took a deep breath [and] just played defensive, to make sure no one got in our zone,” said Truter who helped her team close out the win and earn bronze.

Durham West forward Kate Gallant finished the tournament tied for first in both points (10) and goals (7), but was held off the score sheet in the bronze medal game.

Triolet had three power play chances throughout regulation compared to St. Albert’s single power play, but weren’t able to get one through Drever.

It wasn’t until overtime when the Slash’s top line broke through and made history when Tyra Meropoulis snapped a shot past Thibault to capture gold and the 2017 Esso Cup.

“It’s unbelievable, I’ve never been through this excitement in my life so it’s awesome,” said Meropoulis.

Tournament point co-leader Madison Willan and defenceman Ashley Nothof got assists on the final goal to record the only points of the game and give Drever her fourth shutout in an unbelievable tournament run where she only allowed one goal all week.

The St. Albert Slash are the first team from Alberta to win the Esso Cup and the only team to complete the tournament with an undefeated 7-0 record, the perfect ending to their 41-6-0 season.