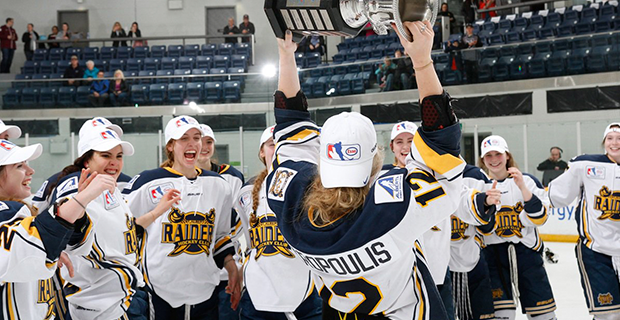 For the first time in the Female Midget National Championship, there is a repeat champion after the St. Albert Slash beat the Saskatoon Stars 2-1 in the final.

After scoring the lone goal in the final last year, Tyra Meropoulis showed she’s a big-game player by potting the game’s first goal. Madison Willan scored late in the second to put the Slash up 2-0, but right at the start of the third, Kianna Dietz potted a goal for the Stars to draw them within one. However, that was all the offence they could muster. Camryn Drever, who was a part of the team last year, stopped 14 of 15 shots.

Leading up to the finals, the Stars were rolling. They scored fewer than four goals just once, a 3-0 win, and were by far the favourites. However, the Slash shutdown the Stars very effectively.

The repeat was almost put away in the semifinals as the Slash required a shootout to get by the Brampton Canadettes 2-1. Both goalies, St. Alberta’s Drever and Hannah Szczepanowski of Brampton, had brilliant performances, stopping 27 of 28 shots each.

Saskatoon continued their dominance in the semis, beating Lanaudière 5-1 thanks to two goals apiece from Grace Shirley and Mackenna Parker.

In the bronze medal game, Lanaudière beat Brampton 2-1 after scoring both their goals in the first and holding off the Canadettes charge. Sarah Vanier had 30 saves for the Quebec squad.

The Stars dominated the leaderboard, having five of the top 10 scorers, led by Parker with seven goals and 13 points. Brampton’s Emma Potter tied with Shirley for second in scoring with nine points.

Saskatoon’s Arden Kliewer had two shutouts and allowed one goal on just 49 shots to finish with the best save percentage at .980. St. Albert’s Brianna Sank 1.00 GAA was the tops.

Next year, the Esso Cup heads to Sudbury, the city that hosted this year’s TELUS Cup.