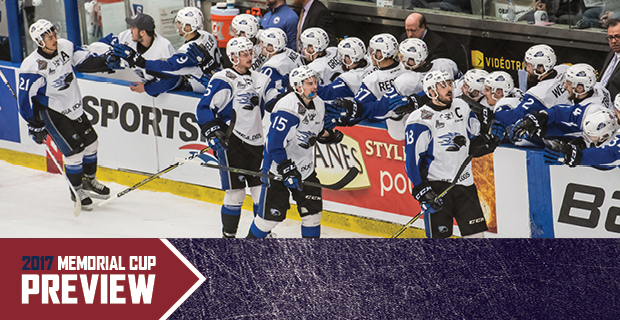 Rack up another QMJHL championship for the Saint John Sea Dogs.

During the second week of May, the Sea Dogs captured their third league crown since 2011 when they swept the Blainville-Boisbriand Armada (4-0) in this season’s President’s Cup final.

“The best part of our team is that we have a good bunch of kids with tremendous character, we wouldn’t have won the championship without that,” admitted Sea Dogs head coach, Danny Flynn.

“As a unit, they put away individual goals for team goals. Winning the President’s Cup gave us an invite to the Memorial Cup. The teams get better so that means we’ll have to be better if we want to experience any success.”

This will be Flynn’s fourth coaching appearance at the Memorial Cup. In 1993, Flynn was an assistant coach with the OHL’s Sault Ste. Marie Greyhounds when the team captured the national championship.

His other visits occurred in 2006 as an assistant head coach with the Moncton Wildcats, the third time came in 2010 as Moncton’s bench boss.

The Sea Dogs have participated in two previous CHL championships.

In 2011, the Sea Dogs became the first team from Atlantic Canada to win a MasterCard Memorial Cup when they defeated the Mississauga St. Michael’s Majors 3-1.

The following season, the Sea Dogs fell to the Shawinigan Cataractes 7-4 in the semifinals at the 2012 Cup.

Saint John steamrolled their opposition throughout the playoffs this spring finishing with the postseason with an impressive 16-2 record.
They posted back-to-back sweeps over Rimouski and Val-d’Or in the first and second rounds.

From there, the Sea Dogs eliminated the Chicoutimi Saguenéens 4-2 in the Q semifinals before ousting Blainville-Boisbriand in four straight matches.

In the final against the Armada, the Sea Dogs allowed a record low 4 goals against.

Saint John will represent the QMJHL at the 2017 MasterCard Memorial Cup in Windsor, Ontario.

The 99th edition of the prestigious tournament will run from May 19-28 at the WFCU Arena in downtown Windsor with the host Spitfires providing one of Saint John’s opponent in the four team event.

One player that will make an impression at the upcoming MasterCard Memorial Cup is Saint John D Thomas Chabot.

Chabot became the first defenceman in 15 years to earn the honours since Danny Groulx of the Victoriaville Tigres in 2002.

In January 2017, Chabot was named the most valuable player of the World Junior Championships as a member of Team Canada.

He also picked QMJHL Defencemen of the Year honours this season.

“It’s a tremendous honour to win the Guy Lafleur Trophy but I have to give my teammates a lot of credit because without them, I would never have won this award,” Chabot said.

The soon to be 20-year-old (May 21) was acquired by the Sea Dogs in a trade with the Quebec Remparts in December 2016.

The move has paid off for Saint John with Booth paying huge dividends for the New Brunswick-based team.

Booth was between the pipes for every one of Saint John’s 16 wins, gave up a measly 31 goals, registered four shut-outs and sported a 1.67 G.A.A.

“I’m so happy we won, that’s been our goal all season, it’s a great first step as we head to the MasterCard Memorial Cup,” Booth said.

Saint John will begin their quest for the franchise’s second CHL championship when they open the tournament on Friday, May 19 against Windsor at 7:00 pm.