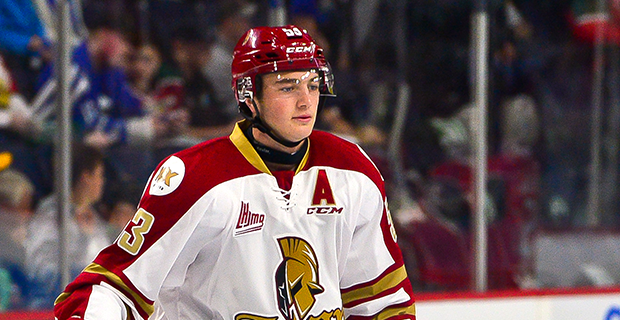 08 Noah Dobson  [RD]
Acadie-Bathurst Titan
In this year’s NHL entry draft, Noah Dobson could be the second defenceman to hear his name called by a big league GM.

Everybody knows that Swedish defender Rasmus Dahlin will be selected first overall by the Buffalo Sabres.

With five defencemen ranked in the Top Ten, Dobson has a very good chance of being the next blueliner in line to walk up to the podium and adjust an NHL cap.

He showed the NHL scouts in attendance that he can do it all. Skate, make plays, show a physical side along with an ability to handle big game pressure.

As a result, Dobson solidified his candidature as a legitimate, high end, NHL prospect.

Prior to the event, his impressive offensive numbers and above average skating ability had every NHL scout drooling over his potential to make the jump to pro hockey.

The native of Summerside, PEI shoots right – a huge plus – and is a nice blend of offence and defence.

Dobson brings several intangibles that every NHL team is craving. He’s a proven winner starting with a gold medal for Canada at the 2017 Ivan Hlinka.

He then helped Acadie-Bathurst take home the QMJHL’s President’s Cup in 20 playoff games.

Dobson then showed he can excel against the best at the CHL level when he picked up two goals and five assists, helping the Titan win four straight at the 100th Mastercard Memorial Cup

Dobson is one of the best two-way defencemen available in this draft.

Noah’s biggest asset is his skating, plus his offensive flair and ability to defend. A player of Dobson’s balance ability does not come along often.

He will probably need another year maybe two of development time, but he has the potential to be a number one defenceman at the NHL level, playing both the power play and penalty kill, while neutralizing other team’s top lines.

03 Filip Zadina [RW]
Halifax Mooseheads
The talented forward from Pardubice, Czech Republic is the real deal when it comes to creating offence and putting up points.  Zadina, 18, lit up the Q in 2017-18, his first season on North American ice, scoring 44 goals and 38 assists in 57 games for the Halifax Mooseheads, topping all rookies in points. His performance at the 2018 World Junior Hockey Championship solidified his status as a potential Top 3 pick. Zadina had seven goals in seven games for his native country in his first tournament appearance, showing the type of skills that have him defined as a legit player.  Zadina always wants the game on his stick moves well in tight areas and protects the puck with authority.

10 Joseph Veleno [C]
Drummondville Voltigeurs
Veleno has been waiting a long time to be eligible for the 2018 NHL Entry Draft. At 15 years old, the Montreal native became the first player granted exceptional status to enter the QMJHL in 2015. The Saint John Sea Dogs picked him first overall that year with Veleno collecting 43 points in 45 games during his rookie season. He participated in the 2017 Mastercard Memorial Cup and was Canada’s team captain at the 2018 U18 World Championships. Veleno is not a natural goal scorer but he plays the game the right way. He skates extremely well, has a good shot and owns an above average hockey IQ that should enable him to be successful at the next level.  At 6'1'' and 194 lbs, he has the size to compete against anyone.

21 Jared McIsaac  [LD]
Halifax Mooseheads
McIsaac can skate at the NHL level, there’s no other way to describe his strongest skill. Acceleration and playing at a high pace has the scouts nodding their heads in agreement.  He is at his best when he moves his feet. His above average speed enables him to be a factor at both ends of the rink.  A very good decision maker when he has the puck, McIsaac also has a nasty side that makes him one tough son of a gun to play against.  At 6’1”, and 195 pounds the Truro, Nova Scotia resident is still raw but will benefit from some additional time in junior, playing big minutes in all situations.

22 Benoit-Olivier Groulx [C]
Halifax Mooseheads
The first overall pick in the 2016 QMJHL Draft is expected to be a first round selection in this year’s NHL Entry Draft. The report on Groulx is that he’s a complete 200-foot player that is committed to being effective on both sides of the puck. He already has good size, 6’1” and 192 pounds and uses his large frame to protect pucks and set up shop in front of the opposition’s net. This season he put up 28 goals-27 assists-55 points in 68 games for the Mooseheads. His skating needs work but he can score which every NHL club is looking for. The owner of a tremendous shot and exceptional one-time release, the Gatineau, Quebec native has the potential to slide into a second line role.