Patrick Steps Up as Unanimous Favourite 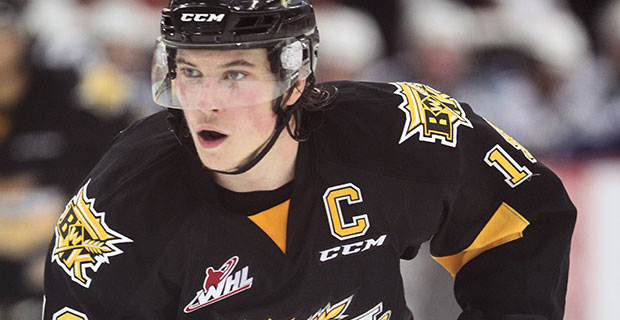 This year may not present the most star-studded NHL draft class in recent memory, but with a legitimate argument to be made between the top two prospects for the first time in years, it’s sure to provide some added excitement when the New Jersey Devils take the podium in Chicago on June 23.

While both Nolan Patrick and Nico Hischier boast a great deal of skill and awareness, one thing sets Patrick apart from the pack — his size.

At 6-foot-3 and 198 pounds, the Brandon Wheat Kings centre stands two inches taller than Hischier with 22 extra pounds to throw around.

While he’s been facing a handful of injuries of late, Patrick’s size and his ability to use it can make a world of difference at the NHL level.

While the Wheaties captain had his season cut in half with injuries, he started drawing draft interest well before the puck dropped in September. Patrick has been a point-per-game player ever since joining the league as a 16-year-old in 2014-15, netting 56 points in 55 games as a rookie then nearly doubling his numbers as a sophomore with 41 goals and 61 assists in a full 72-game campaign.

The Winnipeg product truly found the national radar midway through that sophomore year by scoring in 12 consecutive games, totaling 18 goals in the span before finally being held off the scoresheet in a 4-3 loss to the Medicine Hat Tigers. He answered with five points in his next game.

But Patrick is more than a consistent presence in the regular season — he’s a big-game performer, and he proved it in the postseason.

A year after falling to the Kelowna Rockets in the WHL championship, Patrick put the Wheaties on his back and earned the title of playoff MVP — the first 17-year-old to do so since Tyler Johnson of the Spokane Chiefs in 2008 — with a staggering 13 goals and 17 assists and a plus-19 rating en route to the Ed Chynoweth Cup.

While he only managed to lace them up for 33 games due to various injuries this season, Patrick’s game average didn’t take much of a hit, slipping from last year’s 1.42 to 1.39 after gathering 20 goals and 26 assists.

The biggest obstacle facing Patrick at this year’s draft is his injury situation, and his recent inactivity as a result. While he’s still ranked No. 1 across the board, Patrick told the media at the NHL scouting combine that he’s been dealing with a pair of sports hernias.

The injuries forced Patrick to the shelf from early October to January — leaving him off Canada’s world junior roster. While he returned for a prolific start to 2017, he was unable to compete for Brandon in the playoffs and was forced to watch them get swept by the Tigers.

It wouldn’t be out of the question to see New Jersey gamble on Hischier with the No. 1 pick, but there’s no disputing Patrick’s pedigree, and with an NHL-ready frame it should come as no surprise to see him sporting New Jersey Devils colours on June 23.

Other WHL Prospects to Watch:

Cody Glass, C - Portland Winterhawks
ISS Rank: 6
Portland Winterhawks centre Cody Glass should find himself walking to the stage within the first 10 picks of the draft after a staggering increase in offensive production this season. After collecting 27 points in 2015-16, Glass nearly cracked triple digits in Portland this year — totaling 94 points with 32 goals and 62 assists. The 6-foot-2, 178-pound two-way forward is penciled in at No. 6 by International Scouting Services.

Cal Foote, D - Kelowna Rockets
ISS Rank: 12
North of the border, Kelowna Rockets defenceman Cal Foote will look to follow the path of his father, Colorado Avalanche alumnus Adam Foote as a first-round NHL draft pick. Ranked 12th overall by ISS, the 18-year-old Colorado product is even pegged to go higher than his dad — who went 22nd overall to the Quebec Nordiques in 1989. Foote has provided a steady presence on Kelowna’s blue line for each of the past two seasons, capped off with a plus-39 rating and 57 points in 71 games this year.

Kole Lind, C - Kelowna Rockets
ISS Rank: 24
Foote’s teammate Kole Lind is also expected to go in the opening round of the draft. The Shaunavon, Sask. product more than doubled his point production with the Rockets this season, netting 87 points in 70 games before adding 12 in the playoffs to earn himself a No. 24 ranking from ISS.

Kailer Yamamoto, RW - Spokane Chiefs
ISS Rank: 26
Heading back to the U.S. Division, Spokane Chiefs Kailer Yamamoto and Jaret Anderson-Dolan have earned their way onto the international radar despite missing out on the playoffs for the first time since 2006.

Yamamoto came one point shy of joining the century club this season, collecting 42 goals and 57 assists for 99 points in just 65 games to earn the No. 26 ranking from ISS. Spokane’s hometown hero, Yamamoto has proven he can compete with the best major junior hockey has to offer despite a 5-foot-8, 153-pound frame.

Jaret Anderson-Dolan, C - Spokane Chiefs
ISS Rank: 31
Anderson-Dolan sits five spots behind his Chiefs teammate at 31st overall — putting him just inside this year’s first round with the addition of the Vegas Golden Knights. The former HockeyNow Player of the Year surpassed a point-per-game average with 76 in 72 contests this season. While he lacks in offensive production compared to Yamamoto he makes up for it in size at 5-foot-11 and 188 pounds.

QMJHL: No One Settling with Hischier in Second

OHL: Vilardi’s Stock on the Rise After Memorial Cup

CJHL: Makar Impresses to Last Moments of the Season