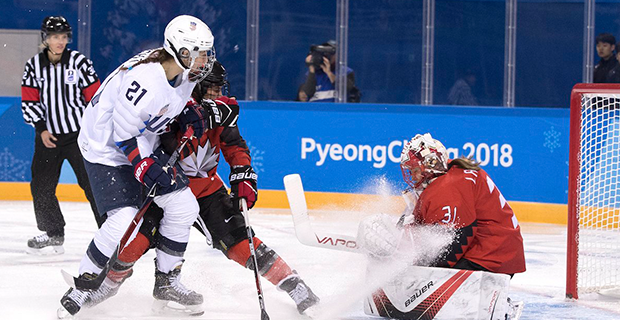 U.S. forward Hilary Knight crashes the net as Canadian goalie Geneviève Lacasse makes one of the 44 saves in a 2-1 win in the last game of the preliminary round at the 2018 PyeongChang Olympics. (USA Hockey/Twitter)

It took two trips to the Olympics for Geneviève Lacasse to get her first game in net for Canada’s national women’s team and she wasn’t about to squander the opportunity.

Lacasse (Kingston, Ont./Calgary, CWHL) turned aside 44 shots to earn a 2-1 win over the number one ranked team in the world — the U.S.

“Any game at the Olympics is good to play in," Lacasse told IIHF.com. "That was my first Olympic start. I was just excited to be out there with the girls and to contribute to our team win today."

Meghan Agosta (Ruthven, Ont./Hockey Canada) wound things up for Canada with a power play goal at 7:18 after receiving a no look cantering pass from Natalie Spooner who was posted at the side of the net. U.S. goalie Maddie Rooney came sliding across the crease but could not get a piece of it.

Canada carried that lead late into the second period when forward Sarah Nurse (Hamilton, Ont./University of Wisconsin) entered into the offensive zone looking to make a cross ice pass to one of her two teammates that came down with her. Instead Nurse rifled a shot over the shoulder of Rooney and under the crossbar giving Canada a 2-0 lead and her first ever goal at the Olympics.

The U.S. kept the pressure on the Canadians and a minute later Kelly Pannek grabbed a rebound directly in front of Lacasse who fell on her belly trying to smother the puck. It was Hayley Irwin (Thunder Bay, Ont./Calgary, CWHL), who had been a utility player for much of this game, playing sparingly both on defence and as a forward, that decided to take a stab at playing goalie. Irwin found herself behind Lacasse and with the puck just inches from the goal line, she trapped it with her skates as a dog pile of players fell into the crease. On review, officials decided that Irwin had covered the puck with her hand in the scrum and awarded the U.S. a penalty shot.

Jocelyne Lamoureux-Davidson slowly moved in on the Canadian goalie, pulling the puck to her backhand but didn’t have Lacasse fooled as she moved with her sticking her blocker out and deflecting the puck away. It was the first-ever penalty shot Canada has faced at the Olympics.

“It was an intense game, we expected that and I’m sure they did as well. We battled through right to the end and Lacasse really came up big for us,” said Irwin.

The U.S. surged into the third period scoring 23 seconds in to cut the Canadian lead to one goal. Kendall Coyne picked up the puck in the neutral zone, after Canada lost a puck battle at the boards, and used her speed to split the defencemen and put the puck between the legs of Lacasse.

Canada thought they regained the two-goal lead just past the midway mark of the final frame when Spooner’s centring pass from behind the net deflected off both of Hayley Irwin’s skates and into the net. However, officials decided Irwin, who had been snowplowing as she neared the blue paint, had kicked it in. Leaving the score at 2-1 for Canada.

It would remain that way for the rest of the game. Lacasse came up with several big saves including in the final minute with the U.S. employing an extra attacker. One shot hit the post and Lacasse got a piece of another with her glove. She fell backwards as the U.S. buzzed around in front of her. Lacasse closed her legs on the puck as a U.S. forward pushed her into the net just as the final horn went which resulted in another scrum well after the game had ended.

Both the U.S. and Canada will have to wait to play again until Feb. 18 in the semifinals where they will face either Switzerland, Finland, Sweden or the Olympic Athletes of Russia. Those four teams will compete in the quarterfinals on Feb. 16.