No Worries of Rust for Pats in Memorial Cup Opener 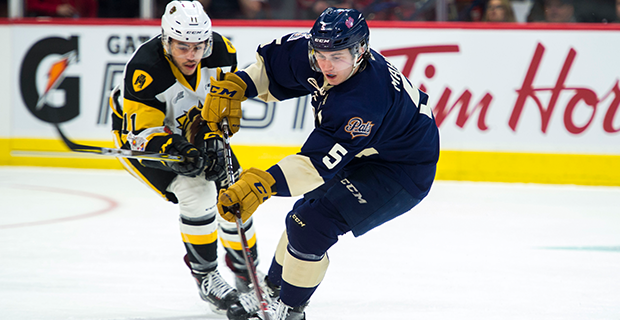 Josh Mahura was one of three Regina Pats to score a goal and an assist in Regina’s 3-2 win over the Hamilton Bulldogs to open the Memorial Cup. (Marissa Baecker/Shoot the Breeze)

One doesn’t have to look hard to see some parallels between this year’s Regina Pats and last year’s Windsor Spitfires.

The Pats are hosting this year’s MasterCard Memorial Cup like the Spitfires did last year.

Both teams also entered the tournament following a six-week layoff as both teams were eliminated in the first round of their league playoffs.

The Pats are now trying to replicate Windsor’s success and capture a Memorial Cup of their own at the 100th annual event.

That goal is off to a good start following their opening game, a 3-2 win over the OHL champion Hamilton Bulldogs on Friday night.

Star players on both teams didn’t waste any time getting their feet wet at the Memorial Cup.

Regina defenceman Josh Mahura was the player of the game as one of three Pats who finished the game with a goal and an assist.

The final cut for Canada’s World Junior team – he was cut and brought back to play in Canada’s exhibition games before Dante Fabbro returned from injury – Mahura scored an end-to-end goal that tied the game at two in the second period.

The Anaheim Ducks prospect controlled the pace of play at times and finished with a game-high seven shots on goal.

Not to be outdone, Colorado Avalanche prospect Nick Henry scored the game winner with 32 seconds left in regulation while adding an assist and finishing with six shots.

Entering the tournament, Sam Steel vs. Robert Thomas was expected to be a marquee matchup and it lived up to expectations.

The Canadian World Junior team members and first-round NHL draft picks were relied on heavily by their teams in the early going and each took more than 25 faceoffs over 60 minutes.

Thomas, a St. Louis Blues prospect, opened the scoring for Hamilton in the first period while Steel, an Anaheim Ducks draftee and last year’s WHL player of the year, tied the game 19 seconds into the second period on Regina’s fourth power play of the game.

The goalie matchup was one to be admired as well.

Kaden Fulcher and Max Paddock may not be stars in their leagues, but both of them made fantastic saves to keep the game very close.

Paddock’s story is particularly intriguing as the Pats rookie, nephew of head coach John Paddock, was called upon to take over the crease in February after veteran Ryan Kubic suffered an injury.

Paddock won 12 out of 15 games to close out the season, but suffered an injury of his own and missed Regina’s seven-game first-round series against the WHL champion Swift Current Broncos.

He was given the nod against Hamilton and finished with 31 saves, including 14 in the third.

Fulcher, a Detroit Red Wings free agent signee, who upped his game over the course of the OHL playoffs, made 27 saves.

Up next at the Memorial Cup is a Saturday afternoon showdown between the Broncos and QMJHL champion Acadie-Bathurst Titan.

There are a number of players to look out for in that matchup, including Swift Current’s Glenn Gawdin, Tyler Steenbergen and Aleksi Heponiemi and Acadie-Bathurst’s Jeffrey Truchon-Viel, Antoine Morand and Noah Dobson.

It will be another great goalie matchup as Swift Current’s Stuart Skinner and Acadie-Bathurst’s Evan Fitzpatrick are highly-touted prospects with the Edmonton Oilers and St. Louis Blues, respectively.