No One Settling with Hischier in Second 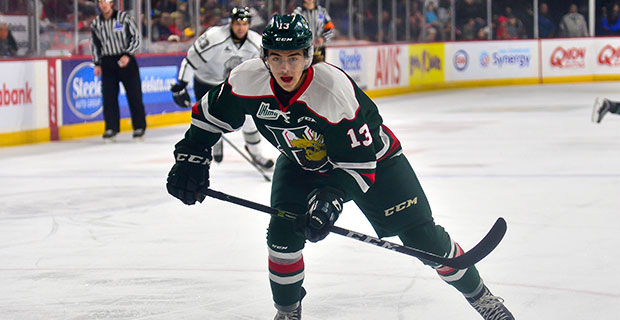 One thing is for sure at this year’s NHL Entry Draft. Nico Hischier won’t be waiting a long time to hear his name called by a big league team.

The native of Naters, Switzerland is expected to be a top three selection and will best fifth overall, the highest draft record for a Swiss player, held by Nino Niederreiter (2010, Minnesota Wild).

International Scouting Services (ISS) has the Halifax Mooseheads centre ranked No. 2 overall for the 2017 Draft. A top three pick is a certainty – but don’t jump out of your chair if the kid is picked first overall.

Let’s be honest, Hischier has all the credentials to be worthy of the title after lighting up the QMJHL in his first season in North America.

Hischier was also impressive at the international level as a member of the Swiss National Junior during the 2017 IIHF U20 championships where he was arguably the story of the tournament.

The Swiss hockey history maker led his country in points (7) and to a berth in the quarterfinals against the United States.

For his efforts during the season in Halifax, Hischier was the recipient of the QMJHL’s Michel Bergeron Trophy as Offensive Rookie of the Year. He also won the Mike Bossy Trophy as the Best Professional Prospect and took his spot at centre on the league’s All-Rookie team.

The accolades for Hischier did not stop there as he took home the CCM Rookie of the Year Award at the CHL Awards ceremony which was held during the 2017 MasterCard Memorial Cup in Windsor.

Hischier was also nominated for the Sherwin-Williams Top Prospect Award but finished second to Brandon Wheat Kings F Nolan Patrick who sits atop the 2017 ISS rankings.

When reading the ISS rankings and ratings, Hischier’s name pops up everywhere.

They have the slick, playmaking centre ranked No.1 in Stickhandling, Leadership and as a 3 vs. 3 Specialist.

The same ratings list the 18-year-old No. 2 in Skating and Puck Protection.

He’s listed third in prospect scoring despite putting up 87 points in just 57 games.

The offensively challenged New Jersey Devils have the first pick and could certainly use a player with Hishier’s tool box.

Devils forwards Kyle Palmieri and Taylor Hall led their team in scoring with 53 points and were one of three 20-goal scorers along with Adam Henrique so Hischier would look exceptional sporting the New Jersey colours.

If the Devils go another route then Philadelphia could be Hischier’s NHL destination.

If the Flyers call Hishier’s name then the organization will get the player with the most offensive upside of any player available, plus elite hockey sense, puck skills and a motor that never stops.

Other QMJHL Prospects to Watch:

Maxime Comtois, LW - Victoriaville Tigres
ISS Rank: 30
Hishier will be selected early, possibly number one overall and then, that could be it for the ‘Q’ until late in the first round when Comtois from the is pencilled in at 30th overall by ISS Hockey. In their mock draft, the 6’2’’, 199 pound forward crept up eight picks and was selected 22nd by the Edmonton Oilers.

A year ago he was being projected in the Top Ten. Comtois plays a very projectable pro style game; with good size, skill and hockey sense.

Pierre-Olivier Joseph, D - Charlottetown Islanders
ISS Rank: 34
Joseph could slip into the first round because of his untapped potential. The younger brother of Saint John Sea Dogs F and Tampa Bay Lightning draft pick Mathieu Joseph is ranked 34th but is an intriguing prospect.

At 6’2 and 160 pounds, Joseph needs to fill out but he is a mobile defender and no fun to play against. He plays a two-way game, but indications are that he will develop into more of a shutdown physical defensive defender at the next level.

Ivan Chekhovich, LW - Baie-Comeau Drakkar
ISS Rank: 50
Chekhovich will enter the draft ranked #50 but may get drafted earlier after scoring 26 times in his first season in the QMJHL. He’s very quick and accelerates to top speed faster than most of his draft peers. Chekhovich is a finesse player through and through, and extremely dangerous around the net.

Not a big body at 5’10” and 177 pounds, but he is arguably the most dynamic skater in the QMJHL besides Nico Hischier.

Ivan Kosorenkov, RW - Victoriaville Tigres
ISS Rank: 77
The six feet, 189 pound right winger scored 34 times and had 63 points for Victo playing in all 68 games. Kosorenkov picked up his game in the second half of the year which raised his draft stock.

He possesses quick feet and is not shy to create space for himself. Kosorenkov is extremely effective at getting into position offensively which resulted in 25 power play points and six game winners.

Antoine Morand, C - Acadie-Bathurst Titan
ISS Rank: 88
Morand will remind you of NHL players like Johnny Gaudreau, Brad Marchand and Tyler Johnson. Not big in stature at 5’9” but loaded with talent, he had 74 points including 28 goals last season.

Morand is creative and skilled, what he lacks in size, he makes up for in smarts and competitiveness with high end mobility and skating skills.
The NHL is now trending towards looking at smaller, skilled players. Morand is definitely one who could make a big impact in today’s game.

QMJHL: No One Settling with Hischier in Second

OHL: Vilardi’s Stock on the Rise After Memorial Cup

CJHL: Makar Impresses to Last Moments of the Season