National Bragging Rights on the Line at 2017 RBC Cup 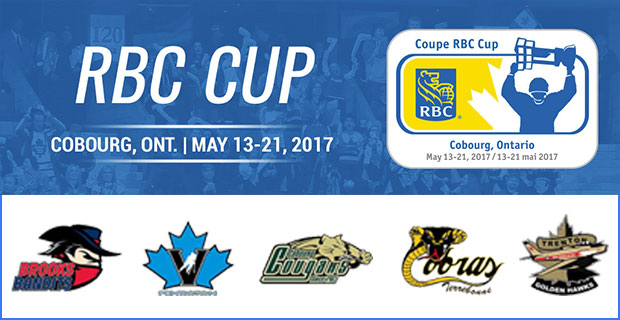 Another lengthy Canadian Junior Hockey League season is about to wrap up.

The 2016-17 season had kicked off last August when exhibition games started being staged across the province in the 10 Junior A leagues that make up the CJHL.

And now there are five teams left in the hunt for national bragging rights. Those clubs will battle in the RBC Cup tournament, which kicks off on Saturday and continues until May 21 in Cobourg, Ont.

As hosts, the Ontario Junior Hockey League’s Cobourg Cougars received an automatic berth into the Canadian tourney.
Another OJHL squad, the Trenton Golden Hawks, will also be participating.

CJHL chairman Kirk Lamb believes the RBC Cup just might be the hardest trophy to win in hockey. A total of 132 teams in the 10 leagues across the country start off the season eligible to capture the prestigious piece of hardware.

And then prevailing in a league championship only earns those winners a spot in a regional qualifying tournament. Success is also required at those qualifying events in order to advance to the Canadian championships.

And then even more stiff opposition awaits at the nationals.

“You’ve got to have all the things you need to win any championship,” Kirk said of elements required to eventually hoist the RBC Cup. “You need good goaltending, you need good coaching and you have to stay disciplined. And you have to have some luck from the hockey gods.”

The gruelling CJHL season covers 10 months, from August to May, for those fortunate enough to vie for the national title.

“It takes a lot of perseverance, which includes a bit of luck too,” Lamb said. “I can’t imagine what these kids go through.”

A closer look at all of the entrants follows.

COBOURG COUGARS
The Cougars organization has known since June of 2015 that it would be hosting and participating in this year’s RBC Cup tournament. Cobourg, which posted an impressive 39-11-0-4 regular season record, was also hoping to win the OJHL title this year. But the Cougars’ quest for that crown concluded when they were swept 4-0 in their best-of-seven conference semifinal series by Trenton. The Cougars, coached by former NHLer John Druce, have not played a game since Apr. 6. The lengthy layoff, however, allowed the Cobourg side to have some of its key players recuperate from injuries, including captain Josh Maguire who suffered a broken hand but will be back for the nationals.

TRENTON GOLDEN HAWKS
The Golden Hawks are making their second straight RBC Cup appearance. The club posted a 3-0-0-1 round-robin record but then bowed out following a semifinal loss at the 2016 tournament, staged in Lloydminster. As for this season, the Golden Hawks failed to defend their OJHL title. Trenton was downed 1-0 in the seventh and decisive game of the OJHL championship series by the Georgetown Raiders. But Trenton earned a berth into this year’s nationals by winning the Dudley Hewitt Cup, which it hosted. The Golden Hawks, coached by former NHLer Jerome Dupont, registered a 2-1 victory over Georgetown in the Dudley Hewitt Cup final.

BROOKS BANDITS
The Bandits have shown plenty of signs that they have had some unfinished business they would like to take care of this season. The Brooks squad also participated at the 2016 RBC Cup but was eliminated following a semifinal loss. The Bandits, who feature highly-touted NHL draft prospect defenceman Cale Makar, now have the chance to improve upon their finish at last year’s nationals. Brooks was dominant in AJHL action this season, posting a 51-4-5 mark. The Bandits suffered just one playoff loss, in overtime, en route to winning the league title, then booked their tickets to the nationals by winning the Western Canada Cup.

TERREBONNE COBRAS
The Cobras have already won a pair of championships this season. And now the Terrebonne squad is hoping to make history by becoming the first Quebec-based team to capture the RBC Cup. The Cobras were rather dominant in regular season action this season, posting an envious 44-5-0-0 mark. The Terrebonne club continued its successes in the postseason, eventually winning the QJHL title. The Cobras then advanced to the nationals by capturing the Fred Page Cup, a four-team regional qualifying event they hosted. No QJHL squad has won the RBC Cup since it was first awarded in 1996.

PENTICTON VEES
Besides the host Cougars, the Vees are the only other entrant at the RBC Cup that did not win a regional qualifying tournament. But rest assured the Vees are a solid club. Penticton had a 41-13-3-1 regular season record. Penticton was awarded an opening-round playoff bye but had to win three series after that to capture the BCHL crown. All three of those series went the maximum seven contests. The Vees then hosted the Western Canada Cup. Though Penticton did not win that event, the club did manage to defeat their BCHL rivals, the Chilliwack Chiefs, in a match which determined the second WCC reps for the national tournament.