Leading the Charge (Between the Pipes): Our Q & A with World Junior Team Canada Goaltending Coach Fred Brathwaite 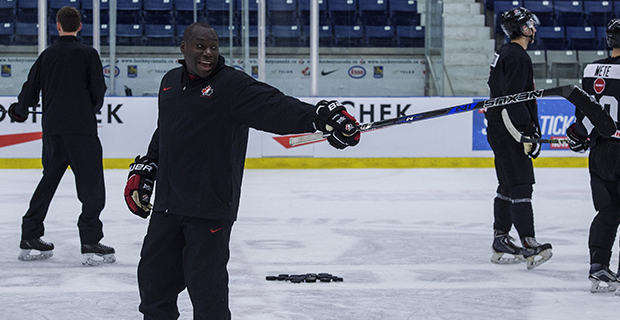 Team Canada goaltending coach Fred Brathwaite has had a long relationship with the World Junior Championship, staring in 1999 when he first represented the country between the pipes. (AJ Messier – Hockey Canada Images)

We All know that famous insurance advertisement: "You're in good hands with Allstate."

Well, it turns out young Canadian hockey goalies are in good hands with Brathwaite.

44-year-old Ottawa native son Fred Brathwaite is Team Canada's goaltending coach for the upcoming World Junior tournament, which is being cohosted by Toronto and Montreal.

Brathwaite has an impressive résumé – tailor made for mentoring Canada's junior goaltenders. A Memorial Cup champion with the 1990 Oshawa Generals, Brathwaite went on to play 254 games in the National Hockey League. He also has extensive international goaltending experience, having played professionally in Russia and Germany. In addition, Brathwaite suited up for Canada's national team during the 1999 season and represented his country at the 2000 and 2001 World Hockey Championships.

Now, Brathwaite is lending his expertise to the two young netminders getting set to tend the twine for Canada at the World Juniors. Eighteen-year-old Carter Hart of Sherwood Park, Alberta is a draft pick of the Philadelphia Flyers (48th overall), while 19-year old Tampa Bay Lightning prospect Connor Ingram hails from Imperial, Saskatchewan and was selected 88th overall by the Tampa Bay Lightning. Both young goalies play in the Western Hockey League and will be all ears as Brathwaite shares his vast body of knowledge.

Brathwaite, meanwhile, recently sat down with HockeyNow to share some of his thoughts on the World Juniors, his two puckstopping pupils, and the general state of goaltending in Canada.

HockeyNow: I'm sure that one aspect of the pride you feel representing your country is the chance to show that our coaching methods in Canada are effective. For instance, you always hear about the great strides European goalies are making on the world stage. There seems to be a school of thought that Canadian goalies are falling behind.  Does that perception irritate you?

Fred Brathwaite: You know what? It really does bother me. As a country, we're making a lot of great strides. For instance, if you look back at last summer's NHL draft, 12 Canadian goalies got picked and that was by far the highest total of any country. With that said, I still think we have to continue to make improvements at the grassroots level. We have to make sure that we're getting our kids the proper goalie training so that when they move up to the junior level they have solid fundamentals. The Europeans are definitely doing a good job developing netminders. But I think we're doing just as good of a job and our country has a number of very strong goaltenders. After all, the best goalie in the world right now (Carey Price) happens to be a Canadian.

HN: When you played, your smaller size (5'7") made it necessary for you to be a more athletic goaltender. Most of today's goalies are much bigger athletes, so what's your process when it comes to instructing bigger goaltenders?

FB: I played in a different era where a number of goalies were smaller guys. I grew up idolizing Darren Pang, another goalie from the Ottawa area who was only 5'5". Mike Vernon and Grant Fuhr were two other guys I watched who weren't very big. Now, there are a lot of bigger guys and a lot of teams are looking for large bodies. I'm constantly attending goalie clinics and keeping up to date with what they're teaching. I try to provide an effective balance between the new techniques of bigger goalies and combining that with some of the athleticism that I used to make sure our goalies can be as effective as possible.

HN: Physical skills are obviously important to a goalie, but I would think the mental game is just as crucial. What kind of mental training are you passing on to the goalies at the World Junior level?

FB: Fortunately, we have two goalies on our team this year (Carter Hart and Connor Ingram) who are both very strong when it comes to the mental aspect of the position. Goaltenders need short memories and have the ability to bounce back if things don't go their way and be able to handle the pressure that comes with playing the position. Unfortunately, the media plays a big part in putting pressure on our goalies. We can't let the outside noise impact us. Yes, we're playing this year's tournament in Canada and people might say that comes with a lot more pressure. But the positive side is that we have home ice advantage and we'll try to treat each game like a typical home game and go from there.

HN: What’s the optimal condition that you're aiming for when it comes to the physical and mental makeup of your goalies?

FB: Every goaltender plays the position using their own specific style. There's only one Carey Price. But there are some general characteristics that you shoot for. Confidence is important and consistency is another big thing. Every goalie will have bad games but if you have the ability to bounce back, that's a huge key. I also like to see how a goalie interacts with his teammates and how they deal with him. If they come back to a goalie after he gives up a bad goal and tap him on the pads, that's a good sign that they have a lot of confidence in him because they know he's going to bear down and make sure it doesn't happen again.

HN: Can you give us a scouting report on the two Canadian goalies who'll be carrying the World Junior colours this year?

FB: Carter Hart has played a ton of hockey over the past two years with the Everett Silvertips of the Western Hockey League. He's so consistent in his approach. He can get 20 shots in a game or he can face 45 pucks and he has the same demeanour. He's always in a good position and stays very calm in the net. He reads the game very well and plays with a lot of intelligence. Connor Ingram comes from a small town in Saskatchewan. He was a late draft pick of the WHL Kamloops Blazers and he came to the team and basically stole a job. He's been the backbone of the Blazers for the last two years. Connor is a guy who might have a rough night but then the next game you know he's going to come back and be very solid. As a team, we're very comfortable with both our goalies. As it stands right now, Carter might be our number one goalie but we could probably throw in either guy and feel very good about our chances.