Elimination Round Set at 2018 Esso Cup 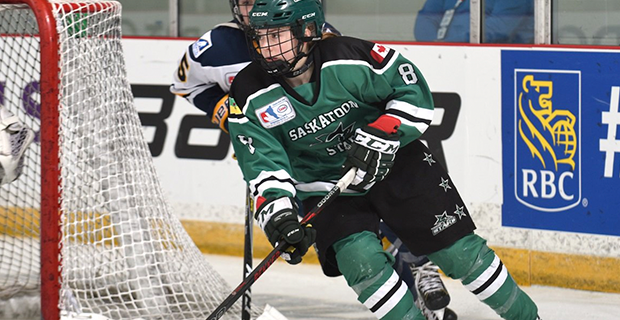 The Saskatoon Stars have been undefeated at Esso Cup.

The Saskatoon Stars have soared through the field at the Esso Cup, posting a perfect 5-0 mark against their competitors. They’ve outscored opponents 23-3 in including three shutouts. The closest games they’ve played were a 4-1 win over St. Albert and 5-2 victory over the Northern Selects.

St. Albert, the Alberta representative, is sitting in second with a 3-1-1 record. Aside from the loss to the Stars, the Slash needed a shootout to get by the Pionnières de Lanaudière.

With the Stars and Slash clearly slotted into first and second after the round robin stage, Ontario’s Brampton Canadettes sat third after recording two overtime wins along with one regulation win.

Lanaudière, the Quebec squad, won the final game on Thursday to finish with two wins leap into a tie for the third spot ahead of Brampton, but the Canadettes finished with the higher seed.

It was a tough tournament for the two teams with the least travel. The Northern Selects finished 1-3-1, while the host Metro Boston Pizza had a very difficult time, losing all five of their games including one in overtime.

Mackenna Parker of the Stars, 11 points (five goals, six assists) in five games, is the leader in scoring and has a hand in 48 per cent of her team’s goals. Three 16-year-olds, Emma Potter (Brampton), Joelle Fiala (Saskatoon) and Ann-Frederik Naud (Lanaudière) sit second in scoring with seven points apiece.

In net, Metro’s Brooke Bennett made a tournament-high 155 saves for her team, while Arden Kliewer had a shutout in both appearances for the Stars, turning aside all 25 shots she faced. Jordan Ivanco, the other Saskatoon goalie, went 3-0 with a 1.00 GAA and 9.39 save percentage, while Brianna Sank of St. Albert has an equally impressive 1.00 GAA and .949 SVP in three game.

Friday in the elimination round, Saskatoon plays Lanaudière while St. Albert faces Brampton

The Stars beat the Pionnières 3-0 in earlier in the week, while St. Albert bested Brampton 6-2. Signs point to a Western Canada final with Saskatoon and St. Albert, but Brampton and Lanaudière will do their best to prevent that scenario.