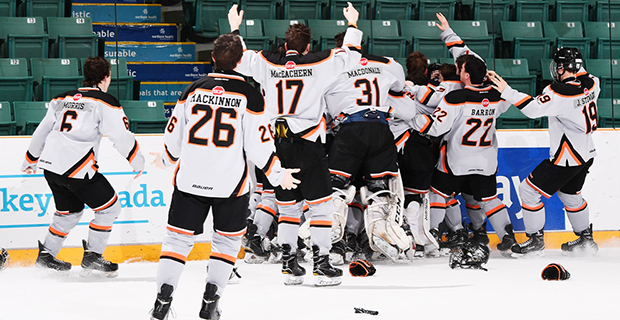 After both semifinal games were decided by only a single goal, the 2017 Telus Cup came down to the wire with a thriller to crown a new champion in B.C.

The Mississauga Rebels took on the Regina Pat Canadians in the bronze medal matchup after the Rebels were downed by the Islanders and the Pat Canadians lost in overtime to the Blizzard. Calder Lund put the Rebels on the board halfway through the opening period, then Massimo Petricca opened the second with a goal just over a minute in and Ryan Madigan gave the Rebels a comfortable three-goal lead going into the third period.

Evan Benwell made it a four-goal deficit to begin the third until the Pat Canadians answered on the power play when Preston Brodziak scored his second of the tournament to put Regina on the board. It wasn’t enough as the Rebels shut down the Pat Canadians for the rest of the period to capture the bronze.

“Especially after we have a great year the way we did, it leaves a mark on the team and the boys that it was a successful year,” Mississauga head coach Michael O’Shea said of the Rebels’ bronze medal game victory.

“It’s tough for Regina, they are a very good hockey team and I feel for them, but really happy for our guys that we came away with something,” added O’Shea of the Pat Canadians, who were gaining momentum heading into the semis but couldn’t quite pull through.

The gold medal game was a much closer affair, as the Cape Breton West Islanders and Blizzard du Séminaire Saint-François went shot for shot throughout most of the matchup. Samuel Dickner opened the scoring for the Blizzard to net his third of the tournament. Jacob Hudson responded for the Islanders to tie the game at one a couple minutes after Dickner’s goal. Yan-Cédric Gaudreault of the Blizzard and Stephen Fox of the Islanders would trade goals to make things even halfway through the period.

This gave the Islanders plenty of time to draw even with the Blizzard. Sure enough, Cape Breton would do just that when Logan Chisholm tie things up with under six minutes left in the game.

Nothing would be settled in regulation and for the second straight day, the Blizzard were looking for another overtime victory, this time to win the Telus Cup. The teams traded chances in the extra frame until Logan Chisholm put the Islanders over the top with his third goal of the tournament and second of the game to make Cape Breton the first Atlantic team to win the Telus Cup.

“We were down pretty much all game, down two goals going into the third period and we kept pushing, they didn’t get on one another, they’re such a positive group and so great to work with. I’m so proud right now,” said Cape Breton head coach Kyle MacDonald of his team’s resiliency.

“It was a tough start with a couple of weird goals went in,” added Islander goaltender Colten Ellis, who made 43 saves in the final game.

“It wasn’t what we were looking for but we kept positive in the room, nobody was getting down on each other, and that’s one of the qualities we have; we stick together, battle through and came back.”