Dube knows what 2018 NHL Entry Draft prospects are going through 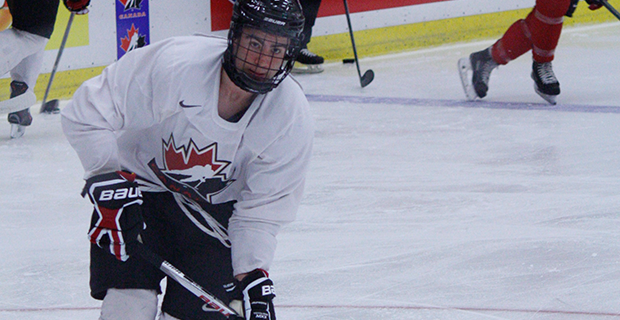 Team Canada’s Dillon Dube was anxious before being taken in the 2016 NHL Entry Draft by the Calgary Flames. (photo by Brendan Nagle)

No sleep ’til Dallas.

Which means there will be more than a few bleary-eyed, teenaged pro hockey prospects reaching for the caffeinated energy drinks today.

The lead up to the 2018 NHL Entry Draft in Dallas is an exciting time. There’s a lot to ingest, a lot to process and a lot to look forward to.

Dillon Dube knows this all too well. Drafted by the Calgary Flames in the second round of the 2016 NHL Entry Draft, the Kelowna Rockets and Team Canada World Junior-champion forward recalls his draft experience.

“It’s a very big deal, with a lot of pressure going into it,” Dube says. “I know they’re probably not sleeping at all. It’s the next step in their career and a huge part of where they want to be.

“Definitely, for sure, there’s a lot of anxiety leading up to it.”

But, as Dube points out, it’s a good anxiety. And it passes almost immediately after your name is called and you pull on the sweater of your new NHL team.

“Right when you get drafted, I think it completely shifts,” says the Cochrane, AB, Minor Hockey product who also played for the AMBHL Airdrie Xtreme and the SSMHL Notre Dame Hounds. “It just becomes any other goal you want to accomplish, because there’s not as much uncertainty anymore. You know the team and you get familiar with it. You can just focus on one thing.”

Since being drafted 56th overall by Calgary, the 19-year-old centre has lit up the WHL, pouring in 58 goals and adding 81 assists in 93 regular-season games over his last two seasons with the Rockets.

He’s a veteran of two Flames training camps, four WHL seasons and has a World Junior gold medal on his resume. Those watching Canada’s 3-1 win over Sweden in the January 5 final knew that game was off the chain from puck drop.

Imagine playing in it.

“That Sweden game was incredible,” recalls Dube, who scored the game’s first goal in front of more than 17,000 fans at Buffalo’s Key Bank Center. “The way they played and the way we played -- it wasn’t even a normal hockey game.

“It was a run-and-gun game. It was just incredible.”

Now all he needs to do is parlay all this major-junior success into a roster spot with the Flames on opening night. Obviously, easier said than done.

There may be a few sleepless nights ahead for Dube, but it’s nothing he hasn’t been through before.