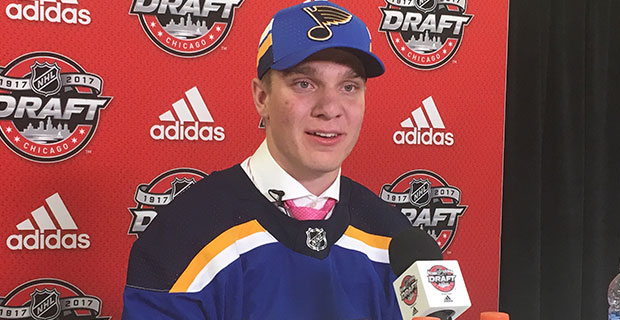 London Knights forward Robert Thomas was selected 20th overall by the St. Louis Blues in the 2017 NHL Draft. Thomas was one of four London Knights selected continuing the streak of a Knights player taken in the draft every year since 1969. (Photo by Matthew Mackinder)

Every year following the NHL Draft, analysts from all around the globe break down the draft and critique why a specific player was taken, which player wasn't taken, why the Red Wings drafted a goalie, why the Panthers didn't draft a goalie, and so on. Players fall and players rise, NHL teams go off the board and select players nobody had in their rankings or NHL teams don't select the player everybody thought they would.

All prospects who will be 18 years old on or before September 15, 2017 and not older than 20 before December 31, 2017 (and all non-American prospects 18 and over by September 15, 2017) were eligible for selection and were hoping to hear their names called by one of the 31 NHL teams where there are only seven rounds and 217 spots available. Out of the 217 selected players, 89 of them (40.6%) skated in the CHL this season with the Ontario Hockey League leading the way with 42 players, followed by 33 players from the Western Hockey League, and 14 players selected from the Quebec Major Junior League. However, the WHL beat out the OHL in first round selections for the first time since 2007 with seven selections compared to the OHL’s five.

Out of those 89 players, 14 were selected in the first round with five picks in the top 10 led by Nico Hischier of the Halifax Mooseheads selected first overall by the New Jersey Devils. However, the second round saw 16 CHL players selected bring the total to 30 after two rounds which accounted for 48.4% of all draft picks in those rounds.

While the CHL was a big winner at the draft, individual teams saw a number of their players get selected, starting with the OHL's Owen Sound Attack who produced a franchise record six drafted players led by Nick Suzuki going 13th overall to the Vegas Golden Knights. The Western Hockey League's Tri-City Americans were second and also set a club record with five players selected, highlighted by Michael Rasmussen being taken by the Detroit Red Wings at 9th overall. Other teams who led the CHL were the Guelph Storm, Hamilton Bulldogs and London Knights of the OHL and Portland Winterhawks of the WHL who each had four players selected.

The Guelph Storm were the second worst team in the OHL in 2016-17 (21-40-5-2) but appear full of talented players and will look to build on their forgettable season in the coming year.

Forty-three different CHL teams had a player selected and the London Knights continued their record streak of having a player chosen at every NHL Draft since 1969. Centre Robert Thomas was first off the board from the Knights as he was selected 20th overall by the St. Louis Blues. Twenty-eight NHL teams selected at least one CHL player with the Arizona Coyotes, Detroit Red Wings, Los Angeles Kings, Ottawa Senators, Vegas Golden Knights, and Vancouver Canucks each selecting five. The Buffalo Sabres, Columbus Blue Jackets, and Washington Capitals were the only NHL teams not to select a CHL player.

When it came to prospect rankings coming into the draft, many scouts had it right and ISS Hockey was spot on for quite a few, but as always there were a few surprise picks as well as a few surprise exclusions. Here is a quick look below: