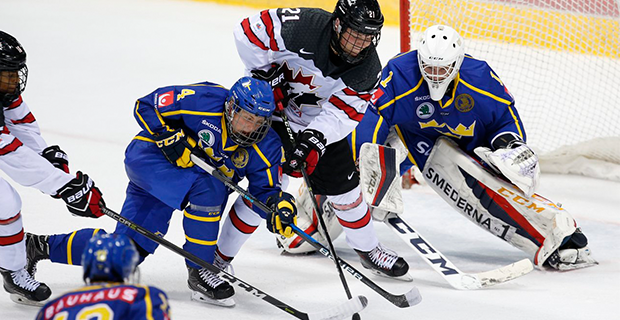 Canada won their semifinal game against Sweden 4-1 to earn a spot in the gold medal game against the Czech Republic at the 2017 Ivan Hlinka Memorial Cup.

Team Canada is heading to its ninth Ivan Hlinka Memorial Tournament final since 2008.

Thanks in part to a goal and an assist from Benoit-Olivier Groulx (Halifax Mooseheads), as well as a 24-save effort from Olivier Rodrigue (Drummondville Voltigeurs), the Canadians were able to defeat the previously unbeaten Swedes 4-1 in Friday’s semifinal.

Up next for the Canadians are the defending champion Czech Republic, who came back from an early goal against to defeat Russia 2-1 in the other semi.

The game was scoreless after the first period and tied at one after the second.

Sweden’s Lukas Wernblom scored with two seconds remaining in the second to leave both teams deadlocked heading into the third.

Noel restored Canada’s lead in the third and Groulx and Dudas followed suit.

Since falling to Russia 4-3 in overtime in their tournament opener, the Canadians have gone undefeated, outscoring Finland, Slovakia and Sweden by a combined total of 15-3.

The Czechs’ Jan Jenik has a tournament-leading six goals, including one from the semifinal, and is second in tournament scoring with seven points.

Teammate Voljtech Strondala is the next highest-scoring Czech with five points (two goals and three assists) while Jakub Lauko has four goals, including the game winner against Russia.

The Czechs have only lost once at this year’s tournament, dropping a 7-3 decision to Sweden in their second round robin game. They’ll be looking for their fourth medal within the last five years while Canada will be in pursuit of its fourth gold within that span.