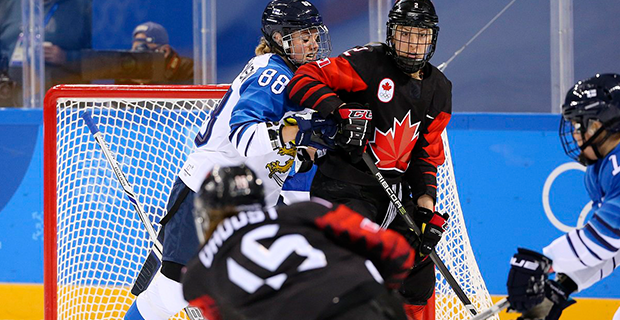 Canada’s Mélodie Daoust firing a shot into the back of the Finnish net as teammate Meghan Agosta screens the goalie out front during. (Hockey Canada/Twitter)

In her sophomore outing with the Canadian national women’s team at the Olympics, it could be considered Mélodie Daoust’s coming out party.

After a two-goal performance in the 5-0 win over the Olympic Athletes of Russia in Canada’s first preliminary game, Daoust (Valleyfield, Que./McGill University) had a goal and assist as they defeated Finland 4-1. That improves over her one point scored during the 2014 Sochi Olympics.

It only took 35 seconds for Canada to put a puck past one of the best netminders in the world, Noora Raty, who had helped her country earn its first win against Canada in the preliminary round of the 2017 IIHF Women’s World Championship.

“It’s the same for every team we play against, we want to win no matter who our opponent is,” said Daoust. “We’re not looking at what has happened in the past, we’re focused what happens here and that’s what counts.”

Meghan Agosta (Ruthven, Ont./Hockey Canada) was served the puck from a patient Daoust who held back from taking the shot. Instead she opted to saucer the puck over a defenders stick to Agosta for a late 31st birthday present with the easy open net tap in.

Canada struck again at 17:11 after Finland’s top defender Jenni Hiirikoski coughed up the puck in front of her goalie to Canada’s captain Marie-Philip Poulin (Beauceville, Que./Montreal, CWHL), who roofed the puck inside the crossbar. With her arms in the air celebrating, the goal light indicator turned on and the horn blasting to signal a goal — play continued on. At the first stop in play, Poulin’s shot was reviewed and deemed a good goal, putting Canada up 2-0. Just minutes later what appeared to be a goal by Natalie Spooner (Toronto, Ont./Toronto, CWHL) was waved off after a review on the play.

Canada jumped to a 3-0 lead at 8:17 in the second period with Daoust once again showing patience as she stalled on the top of the circles holding the puck as a Finnish player slid by attempting to block a shot. Dauost out-waited her and fired the puck at the net as Agosta stood in front screening Raty,

Scoring her first goal in the Olympics to put Canada up 4-0 with 1:34 left in the middle frame, Jillian Saulnier (Halifax, N.S./Calgary, CWHL) raised her arms and just as quickly put them down and shook her head in disbelief. Saulnier received a long pass from teammate Rebecca Johnston (Sudbury, Ont./Calgary, CWHL) as she burst across the blue line on her own to face Raty on a breakaway putting the puck over the goalies right pad.

“That was a pretty special moment. I know the girls were jumping up and down on the bench and to have my mom in the stands was pretty exciting too. To be able to contribute to that win was a pretty memorable moment,” said Saulnier, who became the first female Nova Scotian to score a goal at the Olympics.

Another goal Meaghan Mikkelson can check off the list. Congrats on 100 games with #TeamCanada, @Mikkelson12! pic.twitter.com/xJ3p58TI60

Finland broke the Canadian shutout after a bit of sloppy play in the Canadian defensive end just before the midway point of the third period. Failing to get the puck out of their end three times while scrambling around the zone, left Riikka Valila alone out front with ample time to bang home a goal. Shannon Szabados (Edmonton, Alta./Hockey Canada) sprawled out to make the first save, got her right toe on the second rebound, but without anyone covering Valila’s stick she got a third chance at the puck and buried it to make it 4-1. The goal gave Valila the honour of being the oldest woman to score a goal in either the Olympics or women’s worlds.

“Its always great to get another win under our belts. I was really happy with our first and second periods. I thought we put a lot of pucks on net,” said Canada’s head coach Laura Schuler. “Moving forward, we need to continue to focus on playing our game and working on the details that will continue to make us successful.”

Szabados was tested again right away as Finnish forward Susanna Tapani was sprung on a shorthanded chance. With three Canadian defenders on her tail, she moved left to right trying to deke out the goalie but Szabados stayed with the puck getting her pad on it.

Canada withstood an almost four-minute six-on-five advantage to end the period as Finland pulled their goaltender trying to make something happen with their offence.

Canada will play the number one ranked team in the world the U.S. on Wednesday, Feb. 14 at 7:10 p.m. (PST). The U.S. shut out the Olympic Athletes of Russia 5-0 on Tuesday morning, with Jocelyne Lamoureux-Davidson scoring two goals in six seconds recording a new Olympic record for fastest two goals scored by a single player. The win ensures that both the U.S. and Canada will move directly to the semi-finals.

Pool B Quarterfinal Teams Decided
Sweden and Switzerland are undefeated in Pool B and will advance to the quarterfinals.

Switzerland scored two goals in the middle frame and added another in the third to defeat Japan 3-1.