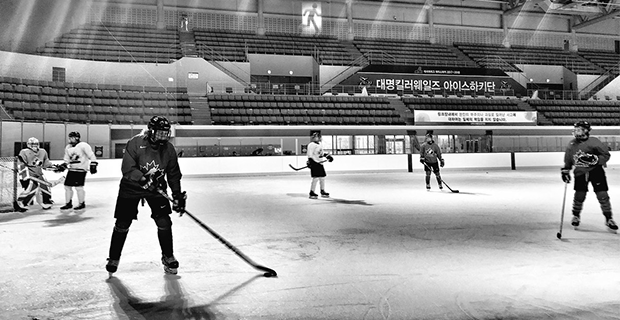 Practicing under the bright lights in Incheon, Canada’s national women’s team played two exhibition games as they prepare for the PyeongChang.(Courtesy of Hockey Canada)

Shannon Szabados recorded the shutout and seven different Canadian players scored in a 10-0 win over Switzerland at a pre-Olympics exhibition game on Sunday.

“I think at the end of the day the reason why my line was successful is because we stuck to the game plan,” said Turnbull. “ We knew going into the game we wanted to get pucks deep and below the dots in the other teams end and we were rewarded for that.”

The only goal came quick in the first frame, with Fortino scoring 65 seconds into the game. By the end of the second period, Canada held a 6-0 lead and a 19-5 advantage in shots on goal peppering Swiss netminder Florence Schelling.

Canada continued their push in the second, which included a goal from Renata Fast (Burlington, Ont./Toronto, CWHL) — her first in international play.

Switzerland plays in Group B at the Olympics with Sweden South Korea and Japan. Canada will face Group A teams in the preliminary round including Finland, Olympic Athletes from Russia and the U.S.

It is Canada’s first time playing female teams since they defeated the U.S. 2-1 in Edmonton on Dec. 17. Canada won five of the six games in the pre-Olympic exhibition series against the U.S., losing only the opening match by a score of 5-1. The Canadian women’s national team had otherwise playing against Alberta midget boys teams throughout the season, their last game on Jan. 21.

Spooner said it didn’t take much to get back to playing against female teams.

“It took us a little bit of time to adjust but it felt great out there and just getting some momentum moving into our first game in the Olympics,” she said.

Team Canada landed in South Korea earlier this week and have been practicing, getting use to the time change and having some fun on the ice.

WHAT ARE THOSE!!!!! eyes🤷‍♀️joyWhen your skates need a quick sharpen & @bayo291 comes to the rescue with these?? Just out for a rip & a laugh! @HC_Women #wheninSouthKorea #noedges #goodtimes pic.twitter.com/FfhY8BRyDW

While the exhibition matches, serve as good preparation, Spooner said the reality of getting to play again in the Olympics will sink in soon.

“I think just getting to the village. We go (Monday) and then I am looking forward to the opening Ceremonies, that was definitely a highlight at the last Olympics just walking in with a bigger Team Canada than just your own team.”

The U.S. women’s team held their first day of practice at the Kwandong Hockey Centre on Feb. 3 as they prepare to fight for the gold medal, having last won the top prize when the sport introduced at the Nagano 1998 Olympic Winter Games.

The U.S. will face Finland in their first preliminary game on Feb. 11, then take on the Olympic Athletes from Russia on Feb. 13 before playing Canada on Feb. 14.