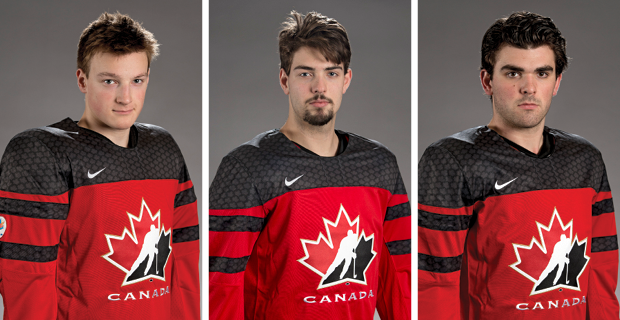 While it’s still an uncommon avenue to choose from compared to the CHL, there have been many NCAA players who have made an impact for Canada at the World Juniors.

Looking back a quarter century, we can point to recently enshrined Hockey Hall of Famer Paul Kariya, who was one of Canada’s top players in back-to-back years (1992 and 1993) as the Canadians began their run of five straight championships in 1993.

They’ll be occupying areas where Canada is strongest as Canada has three returning defencemen and coveted rearguard Victor Mete on loan.
In goal, Carter Hart stands to be the go-to guy with his major junior track record and strong performance in last year’s tournament, but Point will certainly get some chances to show what he can do in goal through some round-robin games at least.

Despite the CHL generally being more favoured than the NCAA when it comes to Hockey Canada spotting talent for the World Juniors, this year’s class of collegiate stars have been great this year and have strong resumés from playing in renowned tournaments.

Although Fabbro is currently nursing a lower body injury, he’s hoping to recover in time for the start of the World Juniors. Josh Mahura from the Regina Pats has been summoned by Hockey Canada to fill in for his absence through Canada’s two exhibition games at least.

Fabbro, drafted 17th overall by the Nashville Predators in 2016, was a steady defender for Team Canada last year and more is expected of him this year with a tournament under his belt.

Makar, Colorado’s top pick (fourth overall) in 2017, was the 2016 RBC Cup leading scorer and tournament MVP. His speed and skill set makes him a potential power play quarterback for the Canadians.

Point, drafted in the fifth round by the Dallas Stars in 2016, played for Team Canada East in the 2015-16 World Junior A Challenge and backstopped the Carleton Place Canadians to the RBC Cup that same season.

He came out of nowhere to have a very strong season at Colgate and is ready to go for Canada, along with his collegiate cohorts.