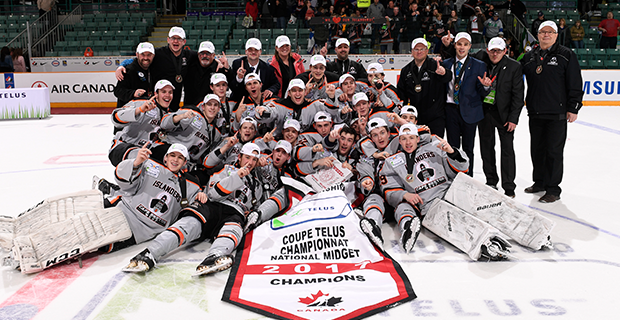 Five regional champions will head to Sudbury to play for the Telus Cup at the end of April. Several top prospects for the OHL, QMJHL, and will be playing and looking to build on their reputations. (Matthew Murnaghan/Hockey Canada Images)

The talent in the TELUS Cup is always abundant, and several top prospects for Canadian Hockey League (CHL) drafts will be under the spotlight this year – some looking to boost draft stock and others hoping to impress their major junior or college teams.

SUDBURY
As the host, the Sudbury Nickel Capital Wolves are no pushover. Years that end in eight have been good to the team at Midget Nationals. The Wolves won the championship in 2008, and a decade earlier, settled for the silver medal – the last time Sudbury hosted.

With 31 wins in 36 league games, the Wolves were the cream of the crop for the league, en route to their 2-1 overtime victory over the North Bay Trappers for the championship. They also made an impressive run at the Ontario regional.

Sudbury had six skaters in the top 12 of league scoring, led by Tommy Vlahos with 22 goals and 49 points. Joseph Mazur, second in scoring, and Parker Savard, were both drafted by the OHL’s Sudbury Wolves in 2017.

MONCTON
Making their eighth appearance at nationals, the Moncton Flyers are the Atlantic’s representative. However, the best the Flyers have done is fourth at the tournament. It’s always a tough road for the Atlantic, with just five teams medalling since 2000. Moncton can be inspired by watching the Cape Breton Islanders win it all last year.

Led by 16-year-old defenceman Lukas Cormier, who is expected to be an early first round pick in the upcoming QMJHL draft, the Flyers also have a formidable goalie duo in Daniel Thompson (.928 SVP) and Brandon McKenna (.927 SVP).

LETHBRIDGE
Following a huge turnaround, the Lethbridge Hurricanes are the Pacific representative at the TELUS Cup. They finished at the bottom of their league last year, but jumped to the top to win in 2018 before besting Fraser Valley in the Pacific play-down.

The Hurricanes have plenty of talented players, including last year’s No. 8 pick in the WHL Draft, Ridly Greig, along with fellow first rounder Ronan Seeley, plus second rounders Byron Fancy and Carson Dyck.

In addition, Zack Stringer just turned 15 at the start of April and is expected to be a top-10 pick in May’s WHL Draft. He ranked second on the team in goals.

NOTRE DAME
Possibly the favourite in the TELUS Cup, the West Champion Notre Dame Hounds won all 13 playoff games and have only lost three games in 2018. The club know success at this tournament – they have four championships in 10 years (back-to-back in 2009, 2010), plus have won 15 straight games at Midget Nationals.

The Hounds have several NCAA commits on their roster including Luke Mylymok (University of Minnesota-Duluth) who was seventh in league scoring and third in points-per-game. In net, Riley Kohonick was named top goalie and had the best GAA in the league.

MAGOG
The Cantonniers won an all-Quebec final in 2000, the last time they played in the Midget Nationals. This year, Magog was 27-7-6, first in the LHMAAAQ but had to get through a seven-game series in the semifinals before sweeping Provincials.

Another top flight QMJHL prospect to watch in the tournament is Patrick Guay from the Cantonniers de Magog. He was second in league scoring, tied for first in goals and is a likely top-five draft choice.

TORONTO
Winners three years, the Toronto Young Nationals are back at the TELUS Cup for the third time in five years and looking for more hardware. This year’s team didn’t roll over competition on their way in, playing to a 2-3 record at Central qualifiers. After an upset of Rockland in the semis, the Nationals beat Ajax-Pickering 6-2 to earn a berth.

Windsor draft choice Austin Brimmer had a strong TELUS Cup Qualifier, leading all players in scoring, and his linemate Cole Burtch, and Ottawa 67’s selection, was right behind him.