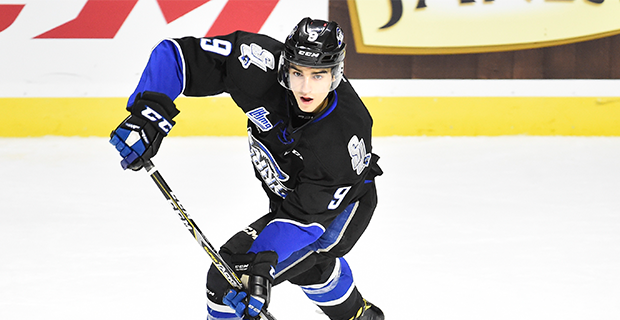 Team Canada’s hopes of redemption will begin Aug. 7 in the Czech Republic and Slovakia.

After a disappointing fifth-place finish that ended a eight-year championship run at the Ivan Hlinka Memorial Tournament, the Canadians will return to the annual under-18 summer tournament.

Joe Veleno will captain the Canadians along with assistant captains Jett Woo and Ty Smith.

Granted exceptional status to enter the QMJHL a year early, Veleno will be the first player to represent Canada twice at the tournament.

He’s developing into a solid young playmaking centre and he can only benefit from a long 2016-17 season in which he helped the Saint John Sea Dogs win the QMJHL championship.

Veleno then scored three goals and an assist in four games at the Memorial Cup.

Both adept, fleet-footed puck movers, they also bring previous leadership on the international stage as captains (Woo with Team Canada White and Smith with Team Canada Black) at the 2016 World Under-17 Hockey Challenge.

The defending champion Czech Republic will be up first for the Canadians in pre-tournament action on Saturday.

From there, Canada will face Russia on Monday, Finland on Tuesday and Slovakia on Wednesday to wrap up the preliminary round. The tournament concludes Aug. 12.

Here’s a look at some of the other 22 players named to Team Canada.

Luka Burzan, F Moose Jaw Warriors: Burzan has drawn some comparisons to Matt Barzal, especially with the 131 points he put up to earn HockeyNow Minor Hockey Player of the Year honours for B.C. in 2015. This centre didn’t look out of place at all in his first WHL season and more can be expected in his NHL Draft year.

Akil Thomas, F – Niagara IceDogs: After a brief adjustment period expected of all rookies, the dynamic forward took off in the second half, almost tying Merkley atop the rookie leaderboard last season. He was strong enough to earn a spot on Canada’s U18 World Championship as an underager.

Jack McBain, C – Toronto Jr. Canadiens (OJHL): At 6-foot-4, he stands out immediately, but has also garnered a lot of attention as a promising playmaker. The Boston College commit is tough to contain and played for Canada at last year’s Under-17 Hockey Challenge, as well as Canada East at the World Junior A Challenge.

Ryan Merkley, D – Guelph Storm: The 2017 OHL rookie of the year led all first-year players with 55 points. His outstanding speed and vision make him someone to turn to if you’re in need of a power play quarterback.

Jared McIsaac, D – Halifax Mooseheads: It’s not easy for defencemen to jump right in and adjust to the pace of major junior hockey, but this 6-foot-1, 190-pound blueliner registered 32 points while showing a mean streak as well.

Alexis Gravel, G – Halifax Mooseheads: He was thrown into the fire immediately with the Mooseheads as he suited up in 50 games during his rookie season. That warranted a spot on the QMJHL All-Rookie team.