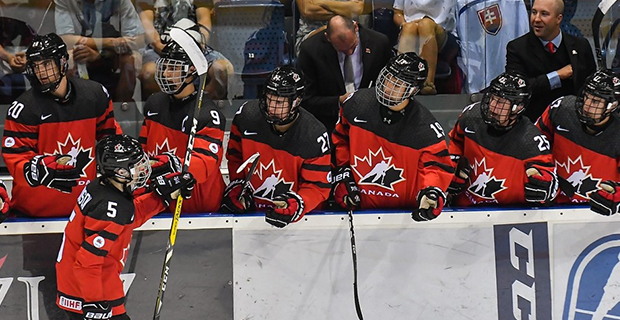 Canada’s National Summer Under-18 Team is off to the semifinals after downing Slovakia 6-1 on Wednesday, August 9 at the Slovnaft Arena in Bratislava.

Canada finished the preliminary round in the Bratislava Group with a 2-0-1-0 record.

Their only blemish at the annual summer tournament which is held in Slovakia and the Czech Republic was a 4-3 shootout loss to Russia in their opening contest.

In their final contest of the preliminary round, Canada continued to show their offensive prowess by scoring two goals in each period outshooting their opposition 39-12.

Canada’s power play was lethal once again going 4 for 7 with the man advantage.

Canada finished in second place in the Bratislava Group with 7 points, one behind Russia while Sweden finished atop their division.

Team Canada head coach Brent Kisio (Lethbridge Hurricanes) has one day to prepare his team for their meeting against the Swedes.

“We know Sweden from the U17s. They’re a great hockey team, they’re fast, they can move the puck, they skate well, so it’s a big challenge but we like that they’re coming to this rink. We feel this is our rink now and we’re excited for the hockey game.”

The winner of the Canada-Sweden contest will advance to play in Saturday’s Gold Medal game against either Russia or the Czech Republic.

Barrett Hayton finished the preliminary round in fourth place for tournament scoring with 3-3-6 pts. Calen Addison 2-3-5 pts was the ninth best scorer while Joe Veleno rounded out the Top Ten with 1-4-5 pts.