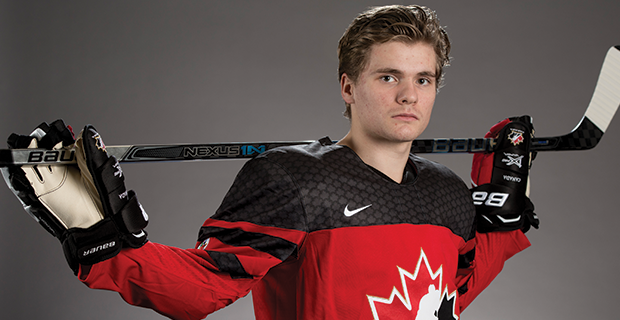 For the second consecutive year Team Canada will play for the gold medal when they face off against Sweden in the championship final at 8:00pm EST on Jan. 5.

Canada made their way to the big game after cruising to a 7-2 win over the Czech Republic in semifinal action before 6,941 pro Canuck fans at Key Bank Center.

Coming into the match, Canada had never lost to the Czechs in the playoff round since the current format was introduced in 1996.

That record remains intact for another year with the Canadian win.

The Czech Republic seemed to stun Canada a bit by scoring first early in the opening period to take a 1-0 lead but Dominique Ducharme’s team regrouped and dominated the game the remainder of the way.

“We (Canada) knew the Czechs would come out hard, they’re a fast, skilled team, their first goal was a bit of a wake-up call for us,” Batherson said.

“After that we showed our true colours, it was a good outcome.”

The Canadians have been on a roll in the playoff round outscoring their opponents by a combined score of 15-4.

Canada pounded Switzerland 8-2 in their quarterfinal contest and followed that up with another 7 goals for against the Czechs.

Team Canada was lethal on the power play once again scoring three goals on the night. They now have 13 goals in six games.

Canadian netminder Carter Hart (Everett Silvertips) was solid between the pipes, stopping 18 of 20 Czech shots for his fifth win of the tournament.

Moving forward, the only country standing in the way of Canada’s 17th gold medal performance is Sweden who will enter the final as the only undefeated team in the tournament at (6-0).

The Swedes have the opportunity to win gold for the first time since 2012 in Calgary.

Sweden knocked off the United States, the defending champions by the score of 4-2 in the other semifinal.

Sweden put the nail in the U.S. coffin with two shorthanded markers using their speed and above average skill set so Canada will have their hands full.

On the back end, watch for D Rasmus Dahlin, the unanimous projected first overall pick for the upcoming NHL Draft.

Dahlin hasn’t scored a goal yet in the tournament but has chipped in with six assists while quarterbacking the Swedish power play and playing in every situation.

Batherson and the rest of his Canadian teammates know what to expect when they line up against the Swedes.

“We saw Sweden play before our game, they play fast and have skill we will need to match that, play our game and keep it simple.”

NEWS & NOTES: Canada will be shooting for their first gold medal performance since 2015 when the tournament was played in Toronto and Montreal. Canada has 16 WJC titles, the most of any country, while the Swedes have two.

Besides 2012, Sweden’s only other World Junior gold came way back in 1981. Sweden finished fourth at the last three World Juniors. Their last medal was silver in Malmo in 2014.

The Czechs will play the United States for bronze prior to the gold medal showdown.