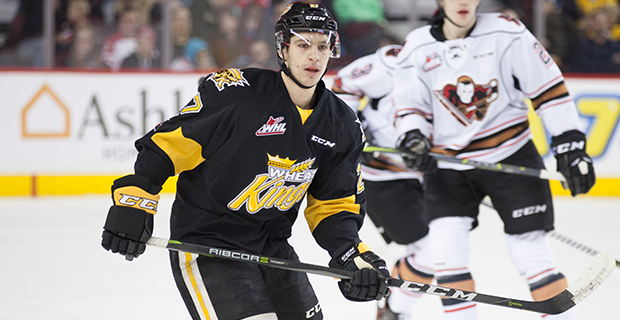 Like countless players before him, Burzan is sitting on pins and needles as he waits for his name to be called at the 2018 NHL Entry Draft.

The HN Player of the Year (POY) for 2015 -- who lit up the Pacific Coast Bantam A Hockey League playing for the North Shore Winter Hawks (80 goals, 51 assists in 62 games) in the 2014-15 season -- has been grinding away in the Western Hockey League.

Drafted by the Moose Jaw Warriors at the WHL 2015 Bantam Draft, he spent most of the past two seasons with the powerhouse Warriors before being traded to the Brandon Wheat Kings in January.

He finished the season strong in Brandon, putting up nine goals and 21 assists in 30 games, and adding two goals and seven assists in 11 postseason encounters.

“He did a really good job with us of getting to the hard areas and capitalizing on opportunities in tight,” Wheaties head coach David Anning says of the 18-year-old centre. “His scoring touch came through once he joined us. He was able to find the back of the net in some key situations for us.”

Anning believes the 6-foot-1, 181-pound forward has the tools to make it in the bigs.

“He’s somebody who wants to be a pro,” Anning says. “He’s determined, he’s motivated, he works hard on and off the ice.

“He’s going to be a determined guy who pushes players around and works hard. He’s going to be somebody they can use in a variety of different different roles. He brings energy to the game, and also has a good skillset.”

For Burzan, ranked 58th by the International Scouting Service (ISS), it’s a question of waiting for his name to be called. He’ll be monitoring the draft with family and friends at his Surrey, B.C., home.

“I’m trying to stay pretty calm,” Burzan says just days ahead of the NHL Entry Draft being held in Dallas. “It’s obviously pretty exciting. I’m trying to not get too nervous.”

As for where he’s potentially headed, he remains neutral. The Colorado Avalanche pick 58th at the draft. But, realistically, the projected second-round pick could end up anywhere in the NHL.

“Just getting chosen by a team is going to be pretty special,” he says. “I’m not really saying ‘I want to go to this team or this team.’ Just getting picked would be amazing.”

Luka Burzan
Centre
WHL Brandon Wheat Kings
Age: 18
Shoots: left
Height: 6-foot-1
Weight: 181 lbs.
2017-18 stats: 15g, 25a with Brandon Wheat Kings and Moose Jaw Warriors
Selected: by Moose Jaw Warriors in first round (sixth overall) of 2015 WHL Bantam Draft
HockeyNow Player of the Year for B.C. in 2015
Played Bantam for the North Shore Winter Hawks of the Pacific Coast Bantam A Hockey League. At the 2015 Western Canada Bantam Championships, Burzan had four goals and six assists in five games as the Hawks captured the gold medal.  He was named the tournament’s Most Valuable Player and was also a First Team All-Star.