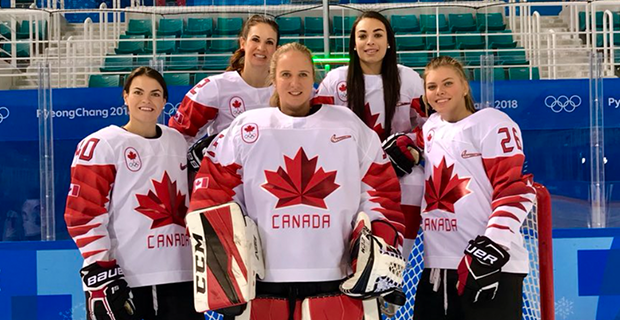 When Meaghan Mikkelson looks back over the 10 years she been called upon to represent Canada with the women’s national hockey team, there is one person she can name that was instrumental in getting her to a third trip to the Olympics.

As can four of her teammates and four U.S. national team members. They are all alumnae of the University of Wisconsin-Madison Badgers coached by Johnson who has led the NCAA team to four national titles.

“You are surrounded by so many great players and the practices were high tempo. [Mark] demanded excellence out of us and built an environment of a strong team culture. He really enforced that great team work results in winning. I think those are the reasons many of the players that have played under him remain successful today,” said Mikkelson.

Including herself. She played for the Badgers for four seasons (2003-2007), winning back-to-back NCAA titles (2006, 2007) and was named an All-American in her senior year. It was during her time with the Badgers that Johnson flipped her game.

“I came to the team as a forward but he thought I was better suited as a defenceman and moved me back. Now here I am 10 years later, still a defenceman,” said Mikkelson.

The result of turning her game upside down? Mikkelson was a top-10 finalist for the Patty Kazmaier Award, given to the top female player in the NCAA in her senior year. She was invited to her first senior national team camp that year.

“There is not a chance that I would have survived as a forward and gotten to this level. You look at the forwards on our team now, and they are just so skilled, have great abilities with the puck and see the ice differently,” said Mikkelson.

As the oldest player on Team Canada at the 2018 PyeongChang Winter Olympics, Mikkelson already has two Olympic gold medals (2014, 2010) and is now days away from battling the U.S. as she tries for her third. Looking around her own dressing room with fellow Badgers Blayre Turnbull, Sarah Nurse, Emily Clark and 2017 Patty Kaz winner Ann-Renée Desbiens, she doesn’t need to be pushed to gush over Johnson’s leadership.

“Just look at Mark Johnson’s experience and resumé. You see his ability to develop players. He sees the game differently and that is shown in the way he manages practices, players and he can really read people. He is such great person and a great hockey mind,” said Mikkelson.

Clark, an Olympic rookie along with the other Badgers on Team Canada aside from Mikkelson, took a year off from school for centralization with Hockey Canada. She plans to return in 2018 to complete her senior year.

“Mark Johnson is my hockey hero. He is so knowledgeable and I am lucky to be able to be coached by him,” said Clark, of her Badgers coach who is a former NHL player, an Olympic gold medallist with the U.S. mens team (1980) that defeated the defending gold medallist Soviet Union (more popularly known as the Miracle On Ice) and coached the U.S. women’s team to a silver medal in 2010.

Under Johnson, son of legendary coach Bob Johnson, Clark was named to the All-WCHA Rookie Team in 2014-15, had another strong season in her sophomore year that led to invites to play for Canada at the 2015 Four Nations Cup and 2016 IIHF Women’s World Championship. Clark led the Badgers in game-winning goals her third season and played for Canada at the 2017 IIHF Women’s World Championship.

“When I was narrowing down what school I was going to pursue, it was not secret that competing at the Olympics one day was my goal. I knew coming to Wisconsin would mean not only getting a great eduction but also help in the pursuit of my dream. It was this perfect balance there,” said Clark.

A former Badger also plays a big role in Clark’s life, Carla Macleod. Clark said Macleod is a mentor, having coached her in her first year of suiting up for Canada at the under-18 level winning gold at the world championship. Macleod is a two-time Olympic gold medallist as a defenceman with Team Canada, was captain of the Badgers for two years and was named USCHO national defensive player of the year in 2005.

It isn’t only Canadians who have developed their game with the Badgers to earn the right to represent their country at the Olympics. On Team USA, captain Meaghan Duggan (2011 Patty Kaz winner), Brianna Decker (2012 Patty Kaz winner), Hillary Knight and goaltender Alex Rigsby are all University of Wisconsin-Madison grads. The assistant coach of the Korean team is Rebecca Baker, who spent two years with the Badgers.

All of the U.S. and Canadian Badgers who are at the 2018 PyeongChang Winter Olympics will clash on the ice in the gold medal final on Feb. 21. Puck drop is 11:10 p.m. EST.