Alex Nylander keeping it in the family 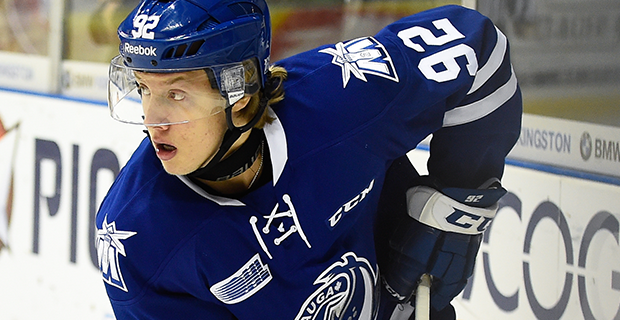 It's not easy coaching your own kid.

In minor hockey, for instance, if a coach has a child on the team they'll often delegate another member of the coaching staff to relay instructions to the player. After all, most children accept constructive criticism from other adults far more readily than from their own parents.
However, in the case of a well-known father-son combination in the Ontario Hockey League, it's a much different story.

Last season, Michael Nylander served as an assistant coach with the OHL Mississauga Steelheads, sharing the bench with his teenaged son, Alex Nylander, who is set to become a first round pick at the June 24th NHL Draft In Buffalo. James Boyd was the Steelheads head coach last year (set to move into a full-time general manager's role next season) and he says the Nylanders didn't have any emotional "father-son" issues when it came time to take care of business on the ice.

"Alex is a very bright young guy," said Boyd. "He's very respectful and he really buys into what his dad has to say. There was never any issue between them. When they were at the rink, Michael was the coach and at home I'm sure they had a much different relationship.

Michael and I coached Alex like any other player and we didn't have to come up with a specific strategy to get our message across."

Of course, it helps when you have the superior talent that Nylander displays on a nightly basis. The CHL rookie of the year last season, Nylander racked up 75 points in 57 games for the Steelheads and added 12 more points in six OHL playoff tilts. Tack on the impressive nine points in seven games Nylander delivered at the World Juniors in Helsinki, Finland and you can see why International Scouting Services (ISS) has the 18-year-old Swede ranked sixth overall for the upcoming NHL draft.

Nylander was actually born in Calgary, where his dad played for the Flames — part of Michael Nylander's impressive NHL résumé that saw him accumulate 679 points in 920 games. Nobody takes more advantage of Nylander's vast hockey knowledge than his two sons — Alex and his older brother, 20-year-old William Nylander. William is coming off a successful year-and-a-half run with the AHL Toronto Marlies and he also received his first taste of the NHL last season, chalking up 13 points in 22 games for the Toronto Maple Leafs. But with the Leafs expected to grab highly touted American Auston Matthews with the first overall pick at the Buffalo smorgasbord, a blue and white Nylander reunion doesn't appear to be in the cards.

"It would be really special to be drafted by the Leafs with William there," Alex admitted to the media mob at the recent NHL Draft Combine in Buffalo. "But it doesn't matter where I go, I'm just super excited."

But is Alex Nylander a budding superstar, just like his big bro?

Boyd says the talented siblings are definitely on the same page of the hockey play book.

"We (the Steelheads) picked William the year before in the CHL Import Draft so we watched him a lot and I think there's an uncanny similarity between the two brothers. Alex is obviously a little taller and lankier than William and has a different skating style. But both of them are able to handle the puck so well and make great plays under pressure. William had to change his style to become a little bit more physical and defensive minded to play in the AHL and I have no doubt that Alex can make the same kind of adjustments to also have success at the next level."

With a boatload of Steelheads predicted to be snapped up in the early stages of this summer's NHL draft (a quality list that includes Nathan Bastian, Sean Day and Mike McLeod), Mississauga is expected to contend for the Memorial Cup next season. However, there's no guarantee that Nylander will be part of that plan. Alex could return to Europe to skate in one of their professional leagues and there's also an outside chance that he could crack an NHL roster right out of his first training camp.

"I think if he can get stronger, he could pull it off," said Boyd. "Alex plays and thinks the game at such a high level and he also elevates his play when the stakes get higher and the pace picks up. I can definitely see him going to an NHL training camp and making a big enough impression that the team who drafts him will have to decide whether to give him a longer look. If there's one word to describe the strength of Alex's game and his style of play, I'd use ‘precision.' Alex doesn't need very many chances to put the puck in the net and his creative vision to take advantage of scoring opportunities is off the charts. He's got a unique ability to back defenders off because they have to be so respectful of the talent he has with the puck."

And on the subject of ‘respect,' Nylander has it in spades. Respecting the coaching advice he receives from his father and taking in all the tips from his older brother, one thing is crystal clear when it comes to Alex Nylander's budding career:

He's got all the talent in the world to complete a Nylander family hat trick in the NHL.