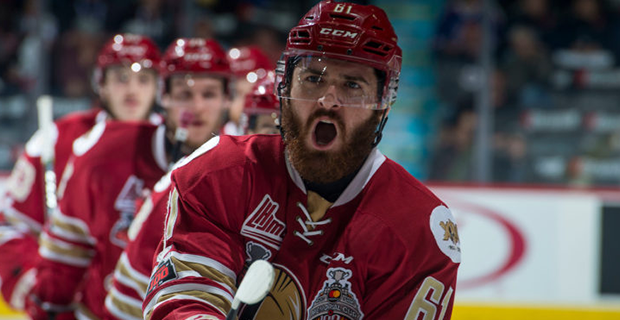 Despite an incredible third period rally by the Regina Pats, the Acadie-Bathurst Titan managed to win their second game at the Memorial Cup to stay undefeated heading into their matchup against Hamilton. (Marissa Baecker/CHL Images)

No lead is ever safe in junior hockey, even a five-goal one.

That’s the hole the Regina Pats were faced with just minutes into the third period of their game against the Acadie-Bathurst Titan in Day 3 action of the 2018 MasterCard Memorial Cup in Regina.

Up 7-2 with roughly 18 minutes to play in regulation, the Titan almost let this one slip away but mustered enough resiliency against the Pats, to win 8-6 becoming the first team to reach 2-0, securing themselves at least a spot in Friday’s semifinal.

“If I look at our situation now, being 2-0 is a very good scenario for us,” said Mario Pouliot, Acadie-Bathurst head coach.

“If you look at the game it turned out to be a good show for the fans but the bottom line for us is that we lost our focus and composure.

We are at the Memorial Cup facing excellent teams every game that we know will push back. Our game needed to be played better and the right way. Our guys may have thought the game was over when it was 7-2 but we learned a lesson and will move forward.”

Acadie-Bathurst led 4-1 after the opening frame and was up 6-2 after the second.

Nobody could have predicted a wild and wacky third period when six goals were scored including four by Regina to make the game interesting.

After Ethan Crossman’s marker at 1:39 of the third period put the Titan ahead 7-2, the Pats rallied to score four times on Titan netminder Evan Fitzpatrick who must have been wondering where his team went in front of him.

With time ticking down and the Pats pressing for the equalizer, Titan D Noah Dobson scored into an empty with his second marker of the game to squash Regina’s dream of an epic comeback.

“The third period disguised a whole bunch of crap so I don’t have anything to say even about that,” said a disgusted John Paddock, Regina Pats head coach.

“Acadie-Bathurst is a very good team. The opposition always has a say in how you play. They did a lot of things to stop us and we (Regina) didn’t do anything. Their best players outplayed every one of our best players, from the goaltender out.”

Dobson led the Titan offensive attack with 2-2-4 pts, followed by Jeffrey Truchon-Viel with 2-1-3 pts and Liam Murphy 1-2-3 pts. Ethan Crossman chipped with a pair of goals while Samuel Asselin had 1 goal and an assist.

Sam Steel did not score for Regina but had four assists to lead the Pats. Cameron Hebig scored twice and had a helper. Matt Bradley had one goal and one assist as did Nick Henry and Josh Mahura. Jared Legien scored once.

The Pats goaltending duties were shared by starter Max Paddock who was yanked from the game after letting in six on 32 shots. His replacement, Ryan Kubic came into the fray early in the third period and gave up one goal on four Titan shots.

Acadie-Bathurst G Evan Fitzpatrick saw his goals against average soar but he still managed to pick up the W with 32 saves while facing 38 Regina shots.

Both teams finished 1-3 on the power play which is a surprising statistic considering a total of 14 goals were scored in the contest.

Attendance at the Brandt Centre: 5,832

On Victoria Day, Swift Current (WHL) and Hamilton (OHL) will meet up with both teams looking for their first win at the 2018 MasterCard Memorial Cup. Game time is 6:00pm MDT.