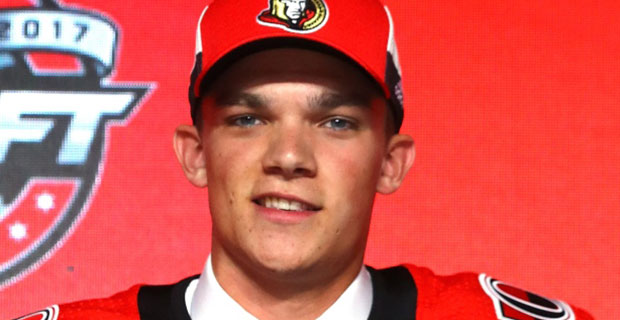 Halifax native Shane Bowers was drafted 28th overall by the Ottawa Senators. The USHL centre is committed to Boston University for the 2017-18 season. (NHL.com)

A Canadian headed the list of 60 current or future NCAA Division 1 players selected during the 2017 NHL Entry Draft held over the weekend at the United Center in Chicago.

The Colorado Avalanche picked defenceman Cale Makar from Calgary, Alta. with the fourth selection of the draft. Makar, who toiled this past season for the Brooks Bandits of the AJHL, was named top performer in the Canadian Junior  Hockey League in 2016-17.

The 18-year-old is headed to the University of Massachusetts Minutemen for his freshman season beginning in September.

Another Canuck who heard his name called in the first round was Halifax, N.S. native Shane Bowers who went to the Ottawa Senators with the 28th overall pick.

The centre iceman has committed to Boston University Terriers for the 2017-18 campaign.

Two other players, both defencemen, from north of the border were selected in the second round of the draft.

King City, Ont. native Mario Ferraro, who will join Makar at UMass this coming season, went 49th overall to the San Jose Sharks while Ian Mitchell from Calahoo, Alta. was chosen by the Chicago Black Hawks with the 57th overall selection. He is headed to the reigning NCAA champion University of Denver Pioneers this fall.

Ferraro played last season for the Des Moines Buccaneers of the USHL where he put up 41 points (8G, 33A) in 50 games. He played the previous two seasons with the Toronto Lakeshore Patriots of the OJHL.

Mitchell has played the past three seasons with the Spruce Grove Saints of the AJHL, totalling 64 points (14G, 50A) in 109 games.

Four other NCAA connected players heard their names called in the opening round while three others were picked in round two.

Oettinger is the first college goaltender selected in the first round of the draft since Cory Schneider (Boston College) went 26th overall to the Vancouver Canucks in 2004.

The three other student-athletes picked in the second round of this year's draft were defenceman Dylan Samberg (Minnesota-Duluth Bulldogs) to the Winnipeg Jets at 43rd overall, defenceman Luke Martin (Michigan Wolverines) to the Carolina Panthers at 52nd and forward Grant Mismash (North Dakota Fighting Hawks) to the Nashville Predators at 61st.