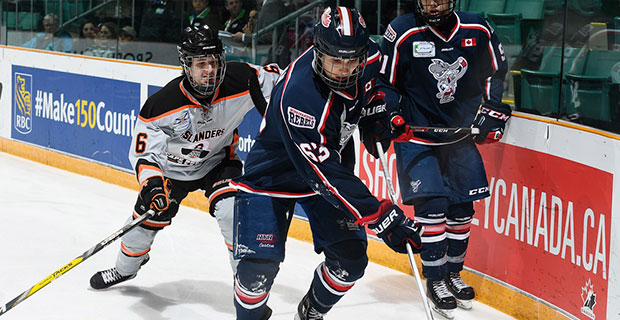 Day 4 of the 2017 Telus Cup saw the standings get a little bit crowded, but one team was able to secure their spot in Saturday’s semifinals.

The Oil Kings weren’t able to fully capitalize on the 11 power play opportunities in the first game of the day against the Pat Canadians. Leduc forward Tyler Schendel opened the scoring for the Oil Kings, but was quickly matched by Matthew Chekay to bring Regina back to even terms.

Before the first ended, the Oil Kings were able to use a man advantage as Ryan Straschnitzki closed out the period with the only power play goal from Leduc. Once the second period started the Pat Canadians went on a tear, scoring four goals by Chase Nameth, Jordan Kazymyra, Carson Denomie, and Tylor Lees on the power play to build a three goal lead. Colby Wolter cut that lead back down to two before the period ended.

The Oil Kings clawed back with a late goal by Berthold, but an empty net goal by Pat Canadian Alex Kannok-Leipert put the game to bed.

Pat Canadians head coach Darren McKechnie was happy with the final result but will be doing some fine tuning before Regina’s next game.

“I liked how we battled today,” he said of the team’s match against Leduc. “We took too many penalties, but we were into the game right from the start. I don’t like giving up four goals, but I like the fact that we ended up getting six, so we’ll take it for sure.”

The second game of the day was a battle for top spot in the standings between Mississauga and Cape Breton. The teams went back and forth throughout the first two periods without anyone getting past goaltenders Colten Ellis and Christian Purboo.

“Coming off a very disappointing loss yesterday (Apr. 26), the guys rebounded very well in paying attention to the little things that make a team successful,” said Rebels Assistant Coach D’Arcy O’Shea. “[Paying] attention to detail and I thought we did a great job in limiting their chances which in turn creates turnovers and we were able to capitalize on our chances.”

The host Cougars started off on the right foot in the final game of the day against the Blizzard when Hunter Floris scored in the first half of the opening period. But, after the intermission, the Blizzard let the offence loose. Pierrick Dubé and Maxime Collin gave the Blizzard the lead and they wouldn’t stop there, as they ended the day with three points each. Dubé would finish with a hat trick and Collin added two assists to top off the day. Jakob Pelletier and Samuel Dickner would add some extra insurance, as the Blizzard would score six unanswered goals to finish the game.

As for his team’s win, head coach Martin Laperrière said after the game: “I think the guys worked together more. Our goal was to try and create loose pucks, be first [on the loose pucks] and keep the puck moving. Our execution was on and we were able to create that offence.”

The last day of preliminary games will have Cape Breton taking on Regina in the early game and then Leduc taking on Saint-François with playoff spots on the line. The last game of the evening will feature semifinal-bound Mississauga and host Cariboo, who will need a win in order to keep their playoff hopes alive.