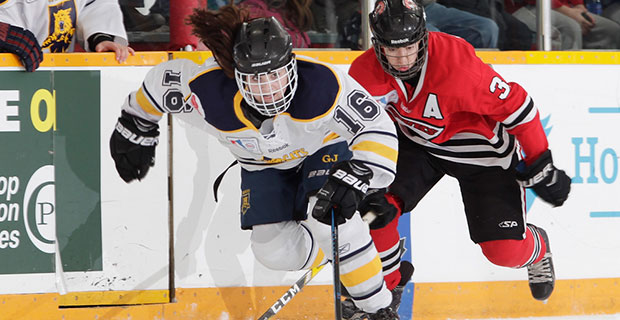 The St. Albert Slash go into Friday’s semifinals with the best record in the 2017 Esso Cup.

After going undefeated throughout the preliminary round, the Slash are primed and ready to put themselves in a position to hoist the Esso Cup Saturday night. St. Albert walked through Durham West in commanding fashion to keep them undefeated through the tournament.

Slash forward Cassidy Maplethorpe put in her sixth of the tournament to open the second period after a quiet first period. The Lightning were able to counter that with Julie Gough’s third of the tournament halfway through the period. But Mackenzie Butz scored less than two minutes after to regain the Slash’s lead before the second was finished. That unfortunately opened the Slash floodgates, much to the despair of Lightning fans.

The Slash cut through the Lightning right at the start of the third period as Kaylee Vader, Maplethorpe and Madison Willan twice scored to give them plenty of breathing space. Tournament points and goals leader Kate Gallant tried to bring back the Lightning with two goals, but the lead was too large for Durham West to catch up in the third.

The Prince Albert Bears were up against the second place Harfangs du Triolet in the tournament with a shot to advance to the semifinals. The Bears were able to get on the board quickly as Brooke Hobson scored in the first minute of the opening frame to get them started off on the right foot. Megan Bureau-Gagnon tied it quickly for the Harfangs to get her team back into it, but the Bears weren’t going down without a fight when Jadyn Kushniruk scored to restore their lead.

The second opened with an unassisted goal from Alli Soyko to give the Bears a two-goal lead. Sandrine Veillette cut the deficit to one for the Harfangs on the power play, but it wasn’t enough as the Bears shut down Triolet in the third to win the game.

The host Hawks were also in need of a win in order to lock up their spot in the semifinals against the winless Wildcats, although it wouldn’t have mattered who they paired up against as the Hawks came out flying. Pembina Valley scored five goals in the first period including a hat trick from Makenzie McCallum and a goal each from Kenzie Heide and Brooklyn Platt.

Wildcats points leader Taylor Gillis was able to chip away at the lead in the second with her third of the tournament, but it wasn’t enough as Alyssa Alderson added on an insurance goal to lock up the victory and a semifinal berth on Friday.

After Thursday’s results, the final four consists of the undefeated St. Albert Slash taking on the Durham West Lightning in the first semifinal and the host Pembina Valley Hawks going head-to-head with Harfangs du Triolet. The Prince Albert Bears missed out on making it to the semis due to a tiebreaker with the Lightning and the Mid-Isle Wildcats couldn’t find their groove to get into the playoff round.