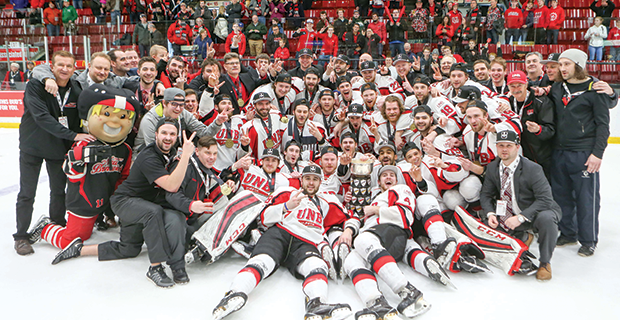 The University of New Brunswick Varsity Reds successfully defended their U SPORTS (formerly CIS) men's hockey title on March 19 with a 5-3 victory over the University of Saskatchewan Huskies in Fredericton, N.B. (Courtesy of U SPORTS)

The University of New Brunswick Varsity Reds defended their U SPORTS (formerly CIS) men's hockey championship crown on home ice by downing the University of Saskatchewan Huskies 5-3 in the title game in Fredericton, N.B.

Despite being the fifth seed in the eight-team field and heading into the national championship tournament as the runners-up in the AUS conference, the Varsity Reds reeled off three straight wins to repeat as champs.

Cam Braes proved to be the hero in the championship finale as he tallied four times to lead the offensive charge. Mark Simpson scored the other UNB goal while Philippe Maillet, the tournament MVP and Canadian university player-of-the-year, chipped in with four assists.

Back-to-back U SPORTS goaltender-of-the-year Jordon Cooke was tagged with the loss despite making 31 saves in the contest. Etienne Marcoux of the Varsity Reds stopped 18 shots to pick up the win.

In the semifinals, UNB blanked the Acadia Axemen 3-0 while the Huskies thumped AUS champion and the second seeded St. FX X-Men 8-0.

The quarterfinals threw the men’s tournament into a tailspin as three higher seeds fell to lower ranked schools. No. 8 Acadia dumped top-seeded Alberta Golden Bears 4-1, No. 6 Saskatchewan got by No. 3 York Lions 1-0 and No. 5 UNB downed No. 4 Queen's Gaels 5-1. The only top seed to win was No. 2 St. FX as they beat No. 7 McGill Redmen 4-1.

In the all-AUS bronze medal match, the Axemen dropped the X-Men 7-3.

The Varsity Reds will also play host to the University Cup again next season as they go for three in a row.