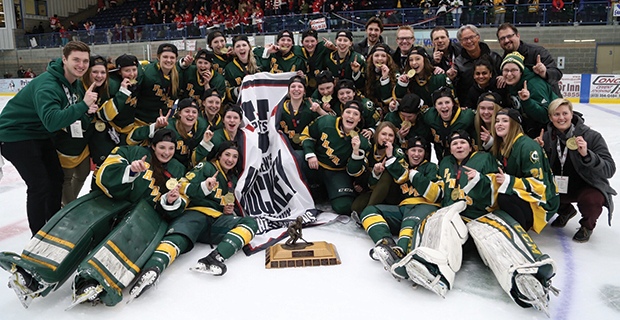 The University of Alberta Pandas shaded the McGill Martlets 2-1 in double-overtime to capture the 2017 U SPORTS (formerly CIS) women's national hockey crown on March 19 in Napanee, Ont. (Ian MacAlpine photo)

Victors were crowned for both men’s and women’s U SPORTS hockey this past weekend.

On the female side, the sixth-seeded University of Alberta Pandas shocked the eight-team women's field, including a thrilling 2-1 double overtime victory over the No. 4 seed McGill Martlets in the championship final.

Taylor Kezama's goal at the 8:13 mark of period five ended the marathon and gave the Pandas their eighth national title.

Amy Boucher opened the scoring late in the second period for the Pandas and Mélodie Daoust, on a power play early in the third frame, knotted things up for the Martlets.

Lindsey Post, who was named tournament MVP, made 40 saves in picking up the win, while Tricia Deguire stopped 24 in a losing effort.

In the semifinals, Alberta downed the Concordia Stingers, seeded No. 7, 6-2, while McGill edged the top-seeded University of British Columbia Thunderbirds 1-0.

A couple of upsets highlighted quarterfinal action as Concordia defeated No. 2 seed Guelph Gryphons 4-3 in a shootout and the Pandas knocked off No. 3 seed St. Mary's Huskies 2-1.

UBC edged the host Queen's Gaels 2-1 and McGill got by St. FX X-Women 3-1 in the other matches.

The Thunderbirds rebounded to claim the bronze medals with a 2-0 blanking of the Stingers.

Cassandra Vilgrain and Logan Boyd had the markers for the winners while Amelia Boughn made 21 saves in picking up the shutout.

The tournament all-star team included Lindsey Post of Alberta between the pipes, forwards Daoust and Gabrielle Davidson of McGill along with Alex Poznikoff of the Pandas. The defence pairing was Emilia Cotter of the Martlets and Kelly Murray of UBC.