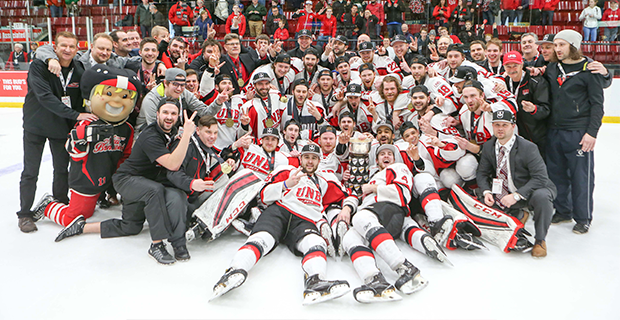 The University of New Brunswick Varsity Reds have been the toast of U SPORTS men's hockey for the past two seasons and will be gunning for a three-peat in 2017-18 when they once again play host to the national championship tournament. (UNB Athletics)

The University of New Brunswick Varsity Reds may have lost some key components of their two-time defending U SPORTS men's hockey championship squad to graduation, including the nation's top player, but don't count them out when it comes to a three-peat.

The Reds, who will be hosting the national championship tournament and therefore are an automatic qualifier for the second straight year in 2017-18, bid farewell to sensational forward Philippe Maillet after four years, along with some other key veterans.

The 24-year-old led New Brunswick to the back-to-back crowns, was named championship tournament MVP last spring and followed that up by being named as U SPORTS player of the year. He ended last season by beginning his pro career with the Ontario Reign of the AHL.

Maillet was recruited to New Brunswick after a stellar four-year junior career with the Victoriaville Tigres of the QMJHL and followed a long list of major junior grads heading east to the Varsity Reds.

So when it came to re-tooling in preparation for their run at three in a row, it only made sense for the Reds to focus in on the junior ranks leading to their five-player freshmen recruiting class for this season all coming from major junior hockey.

The first year student athletes include a pair of forwards from the Ontario Hockey League's Saginaw Spirit, Hayden Hodgson from Leamington, Ont. and Kris Bennett, a native of Brampton, Ont.

Hodgson played for five seasons in the OHL, including stints with the Sarnia Sting and Erie Otters, and is coming off his best junior season with 38 goals and 28 assists in 67 games with the Spirit. He also attended the summer camp of the NHL's Columbus Blue Jackets.

Bennett played four season in the OHL, all with the Spirit, and had 25 goals and 26 assists in 66 games last season.

Together, the pair accounted for almost one-third of Saginaw's offensive output in 2016-17.

The three other firstyear performers all graduated for the QMJHL. They are forward Tyler Boland , forward Olivier LeBlanc and defenCeman Tristan Pomerleau.

Boland played four seasons with the Rimouski Oceanic and finished with 212 points (97G, 115A) in 246 regular season games. Last season, he led the Oceanic in scoring with 103 points (48G, 55A) and finished second in league scoring.

Pomerleau and LeBlanc both played for five seasons in the QMJHL and both were captains of their respective teams.

LeBlanc, a seventh round draft pick of the Columbus Blue Jackets in 2014, played for the Saint John Sea Dogs and the Cape Breton Screaming Eagles. Last season, with the Screaming Eagles, he posted career highs with 10 goals and 33 assists in 58 regular season games.

Pomerleau played 249 regular season games with Victoriaville. In 2016-17, his third as captain of the Tigres, Pomerleau scored five goals and added 19 assists in 44 games. His plus-minus was an impressive plus 21.

UNB opens its preseason schedule on Sept. 15, when they face UPEI in Prince Edward Island. The Varsity Reds then host Dalhousie on Sept. 22, before travelling to Boston College to take on the Eagles on Sept. 30.

Varsity Reds, who will host the 2018 Cavendish Farms University Cup (national championship tournament) from March 15 to 18, 2018.