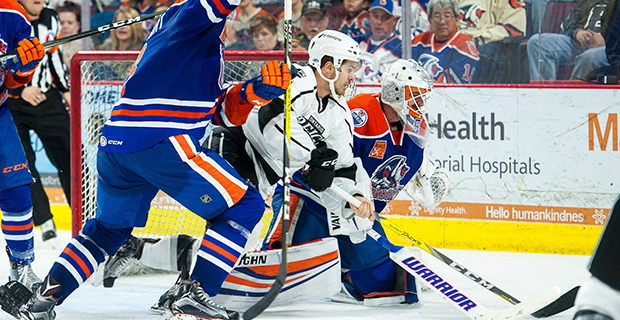 U SPORTS player of the year Philippe Maillet of the University Cup champion University of New Brunswick Varsity Reds is surrounded by members of the Bakersfield Condors during recent AHL action. (Courtesy of U SPORTS)

It's been quite a year for Terrebone, Que. native Philippe Maillet – and it's not over yet.

His impact with the Reign was immediate as he scored his first professional goal in his first pro contest, helping the Los Angeles Kings farm team to a 3-1 win over the Bakersfield Condors.

The four-year university star had four assists in the Reds 5-3 win over the Saskatchewan Huskies in the University Cup. In three championship tournament games, he had 10 points (4G, 6A), was plus-10, was named to the all-star squad and was selected as the Cup's most valuable player.

Maillet was also named as the U SPORTS player of the year for the 2016-17 campaign and selected to the First All-Canadian team (the U SPORTS all-star team) which included three other players who have inked professional tryout deals.

The other two forwards on that star team, Mike McNamee and Elgin Pearce have also extended their seasons in the pro ranks.

McNamee, from Perth, Ont. is playing with the AHL's Syracuse Crunch (Tampa Bay Lightning) while Pearce, from Port Coquitlam, B.C., is with the Manitoba Moose (Winnipeg Jets).

He also fine-tuned his game by playing in 121 QMJHL contests with the Sherbrooke Phoenix and Quebec Remparts before becoming a student-athlete. McNamee had 100 points (40G, 60A) during his major junior career.

Pearce, a three-time winner of the U SPORTS most sportsmanlike player award including this past season, tallied 31 points (20G, 11A) in 28 games with the University of Calgary Dinos in 2016-17. During his university career, he played in 94 games and counted 93 points (49G, 44A).

He also played four seasons in the Western Hockey League (WHL) for both the Kootenay Ice and Medicine Hat Tigers, accounting for 147 points (65G, 82A) in 250 games.

Laval, Que. native Martin Lefebvre, who was named as one of the two first-team all-star defencemen, is now toiling with the Cincinnati Cyclones (Nashville Predators) in the ECHL after a four-year career with the UQTR Patriotes.

The other two members of the U SPORTS First All-Canadian squad are expected to be back for their final seasons of university hockey in 2017-18.

Defenceman Jordan Murray from Riverview, N.B. will be gunning for a third straight national crown as a key member of the Varsity Reds while goaltender Jordon Cooke from Leduc, Alta. will be hoping to backstop the runner-up Huskies to the University Cup in 2017-18.

Murray, who was named U SPORTS defenceman of the year, has appeared in 81 games over his first three seasons at UNB and has 71 points (20G, 51A). He also played three years of major junior in the QMJHL with the Acadie-Bathurst Titans and Drummondville Voltigeurs.

Cooke is a two-time winner of the U SPORTS and Canada West goaltender of the year awards and this past season posted a 19-4-2 record, a goals-against average of 1.94 and a .929 save percentage. He also tied a Canada West record with four shutouts and added two more in the University Cup before falling a win short of capturing the national title.

The other 2016-17 U SPORTS men's individual award winners were: Anthony DeLuca (Rosmère, Que.) of the Concordia Stingers, rookie of the year; Dave Adolph of the Saskatchewan Huskies, coach of the year; and Aaron Armstrong (Teeswater, Ont.) of the Ryerson Rams, student-athlete community service award.