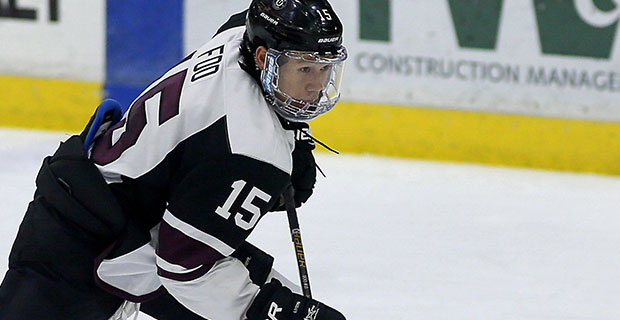 Spencer Foo ended months of speculation this week by agreeing to a pro deal with the Calgary Flames. The former Union Dutchmen star and Edmonton, Alta. native was one of the most sought after NCAA Division 1 free agents on the market. (Courtesy of Union Athletics)

After an exhaustive process which included numerous suitors, the top-ranked Canadian-born NCAA Division 1free agent has finally declared where he is headed next season.

Foo began the process back in April when he announced that he would be forgoing his senior year with the Union Dutchmen to turn pro after an outstanding junior campaign which resulted in the shifty forward being a Hobey Baker Award finalist as top college player in the nation.

Over the past few weeks, the 23-year-old and his agent Michael Kaye narrowed the field down to four teams – his hometown Edmonton Oilers, the expansion Vegas Golden Knights, Detroit Red Wings and the Flames.

The chance to start next season with the Flames and the opportunity to play alongside 2014 Hobey Baker winner Johnny Gaudreau (Boston College) may have played into Foo's decision to shun Edmonton in favour of Calgary.

Foo tallied 62 points (26G, 36A) in 38 just games this past season and finished just a single point out top spot in the country which was shared by his linemate Mike Vecchione (Philadelphia Flyers), Northeastern's Zach Aston-Reese (Pittsburgh Penguins) and New Hampshire's Tyler Kelleher (Milwaukee Admirals), all seniors, at 63.

In three seasons at Union, Foo appeared in 113 games. He totalled 25 points in each of his first two campaigns before his break-out season in 2016-17.

Prior to becoming a student-athlete, Foo, who can play both centre and right wing, toiled in the AJHL for the Bonnyville Pontiacs. Playing in 115 games over two seasons, he had 53 goals and tallied 97 points.

Waiting until after last weekend's NHL Entry Draft in Chicago to make his decision known, Spencer gave up the spotlight to younger brother Parker who was selected by the Chicago Black Hawks in the fifth round (144th overall).

Parker, a left winger, played the past two seasons for the Brooks Bandits of the AJHL. Over parts of three seasons, the 18-year-old appeared in 110 junior games and finished with 94 points. in 2016-17 he averaged better than a point a game with 66 points in 60 games including 34 goals.

Parker will follow in his brother's footsteps this coming season as he has committed to the Dutchmen where he will begin his college career, but now won't get the chance to team up with Spencer at Union.