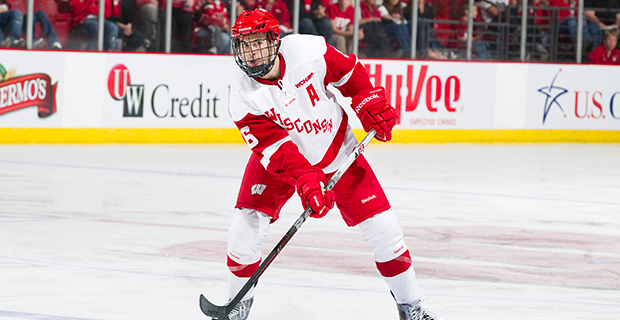 Former Wisconsin Badger Justin Schultz was the top scoring defenceman as the Pittsburgh Penguins repeated as Stanley Cup champions on Sunday. The Westbank, B.C. native, who had 13 points in the playoffs, set up the winning goal in the Cup clinching final. (University of Wisconsin Athletics)

When the Pittsburgh Penguins captured their second straight Stanley Cup on Sunday they also set a record for the most former NCAA Division 1 players appearing in the championship final with 15 getting to hoist the precious mug in Nashville.

A year ago, the Pens tied the record for players trained at the college level with 13. That tied for most with the Cup-winning New Jersey Devils in 1995.

Not only did the NCAA alumni appear in the final, but a number of them were key contributors in the Penguins back-to-back championships led by rookie forward Jake Guentzel.

After three seasons at the University of Nebraska-Omaha Mavericks and just 44 games in the minors, Guentzel found himself on the same line as Conn Smythe Trophy winner Sidney Crosby after scoring 16 times and putting up 33 points in 40 league games down the stretch.

Showing his regular season scoring exploits were no fluke, Guentzel, who was selected by Pittsburgh (3rd round, 77th overall) at the 2013 NHL Entry Draft, finished fourth in team scoring with 21 points (an NHL rookie record) while leading the playoffs in goals with 13 and game winning markers with five.

The Penguins scored 19 goals against the Preds in the final with 14 of those tallies coming off the sticks of NCAA alumni.

In the series clinching 2-0 victory over the Predators in Nashville, five of the players hitting the scoresheet were former student-athletes.

Westbank, B.C. native Schultz, who took over the leadership role on the back end after all-star Kris Letang missed the playoffs due to neck surgery, finished fourth in scoring with 13 points (4G, 9A).

Phil Kessel (Minnesota Golden Gophers), who was the top point producer in the Pens’ first run to the Cup in 2016, placed third in scoring this time around with 23 points (8G, 15A) behind only Evgeni Malkin (28 points) and Crosby (27 points).

The victory also marked the fourth time Kunitz has hoisted the Cup, including three with the Penguins. Only two other NCAA products have more Cup wins, Ken Dryden (Cornell Big Red) and Glenn Anderson (Denver Pioneers), who each have six.