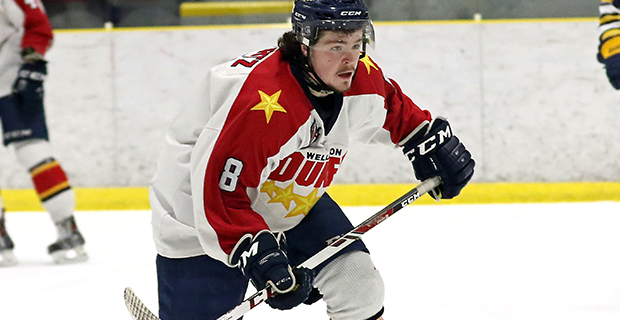 Sniper Brayden Stortz of the Wellington Dukes is headed to Canadian university hockey this coming season as a member of the Brock Badgers. Stortz, who topped the OJHL in goals with 37 and finished second in league scoring with 90 points, is one of 18 players from the loop headed to OUA hockey. (Tim Bates/OJHL Images)

The Ontario Junior Hockey League (OJHL) continues to supply a good number of its graduating players to college programs south of the border, but more and more of those performers are choosing to stay home and become student-athletes.

A total of 18 players from the 22-team loop will be continuing their hockey careers while getting an education this coming season in the Ontario University Association (OUA) division of U SPORTS (formerly CIS).

While close to 60 other OJHL players from the 2016-17 campaign will be heading to the NCAA to compete in either Division I or Division III programs in the U.S. this season, others are choosing different routes, including a pair of players heading to Russia (Sam Hu of the Markham Royals is off to Kunlan Redstar of the KHL) and the U.K. (Steven Mounouchos of the Toronto Pats is off to the University of Exeter).

The two-time defending Dudley Hewitt Cup provincial champion Trenton Golden Hawks list four former players set to play in the OUA in 2017 and another off to the NCAA while the RBC Cup national champion Cobourg Cougars have three going the OUA route and another four committed to DI schools.

Forwards Jeremy Pullara and Anthony Sorrentino of Trenton will once again be Golden Hawks this coming season, but as members of the OUA's Wilfrid Laurier Golden Hawks. The other two headed to the OUA are defenceman Nick Boddy who is off to the Royal Military College (RMC) Paladins and forward Lucas Brown who is headed to North Bay and the Nipissing Lakers.

The Hawks are also losing defenceman Josh Allan, who has committed to Sacred Heart Pioneers of the NCAA for 2017-18, and forward Liam Morgan, who will play for the Union Dutchmen of DI.

The UOIT Ridgebacks out of Oshawa will be welcoming a trio of Cougars to the fold this coming season with defencemen Jesse Baird and Brennan Roy along with forward Josh Maguire headed to that OUA program.

Goaltender Stefano Durante heads the list of four Cobourg players headed to DI in the U.S. He led the OJHL in goals against average this past season with 1.92 and was second in save percentage at .930. He has chosen to join the American International College Yellow Jackets in Springfield, Mass.

Former Cougars Ryan Casselman and Sam Dunn are both set to join the Niagara University Purple Eagles while Brenden Locke, who is headed to the Cornell Big Red, rounds out the group.

The Wellington Dukes, Burlington Cougars and Whitby Fury will each see a pair of graduating players headed to the OUA this coming campaign.

Brayden Stortz, who topped the league in goals with 37 and finished second in league scoring with 90 points as a member of the Dukes, is off to the Brock Badgers while teammate Justin Bean has chosen the York Lions.

Chris Cobham and Matthew Watson of the Cougars have chosen play for the Guelph Gryphons and Western Mustangs respectively while teammates Justin Brand and Scott Kirton of the Fury are both headed to the University of Toronto Varsity Blues.

Some of the other OJHL grads committed to OUA programs include Keegan Blasby of the Georgetown Raiders (York), Cam Lamport of the Lindsay Muskies (RMC), Jonathan Tecce of the Markham Royals (Windsor Lancers), Brandon Hughes of the Oakville Blades (Ryerson Rams) and Jeff Joynt of the Toronto Patriots (Queen's Gaels)