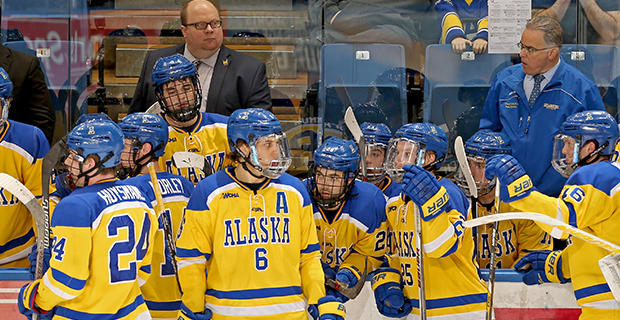 Wainwright, Alta. native Dallas Ferguson has resigned as head coach of the University of Alaska Nanooks for a similar position with the Calgary Hitmen of the WHL. The NCAA Division 1 men's hockey will feature nine new bench bosses in 2017-18. (University of Alaska Athletics)

A total of nine NCAA Division 1 men's hockey programs will feature new head coaches when the 2017-18 campaign kicks off in October.

The latest change is at the University of Alaska where long-time Nanooks bench boss Dallas Ferguson has resigned to take over a similar post with the Calgary Hitmen of the Western Hockey League (WHL).

Last season college hockey had just four head coaching changes while the nine this season is just one less than the 2011-12 campaign which had 10 changes.

While the previous eight schools have announced their coaching changes, Alaska has begun the search for Ferguson's replacement.

Ferguson, a native of Wainwright, Alta., has been the Nanooks head coach since 2008 after serving the previous four seasons as an assistant and led Alaska to its only NCAA tournament appearance in 2009-10.

During his playing career, Ferguson was a star defenceman and four-year letter winner with the Nanooks from 1992 to 1996. He finished with 104 points (17G, 87A) and was a three-time recipient of the top defenceman award. He also served as team captain during his senior campaign.

The coaching carousel kicked off at the end of last season as legendary Michigan Wolverines coach and Regina, Sask. native Red Berenson retired after a 33-year career opening the door for Flin Flon, Man. native Mel Pearson to take over control at Michigan.

Pearson, who becomes just the ninth head coach in program history, is no stranger in Ann Arbor, having served as an assistant coach for 11 years (1988 to 1999) and as associate head coach to Berenson for 12 campaigns (1999 to 2011) before heading to Michigan Tech where he has been the head coach of the Huskies for the past six seasons.

Michigan Tech has since hired Joe Shawhan as Pearson's replacement.

Another Canadian, Dave Smith from Arthur, Ont. is leaving the Canisius Golden Griffins after 12 seasons to assume the head coaching role with the Rensselaer Polytechnic Institute (RPA) Engineers. He has been replaced at Canisius by assistant coach Trevor Large from Brampton, Ont.

Yet another Canuck, Mike Gabinet from Edmonton, Alta., has taken over the head coaching duties with the University of Nebraska at Omaha Mavericks. He spent one season as an assistant with the Mavs and previously coached at the Northern Alberta Institute of Technology.