Four Canadians Up for 2017 NCAA Woman of the Year Award 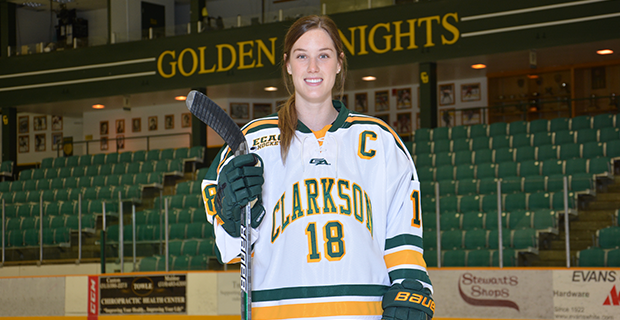 Clarkson Golden Knights senior captain Cayley Mercer from Exeter, Ont. is one of four Canadian-born hockey players in the running for the 2017 NCAA Woman of the Year Award. (Clarkson University Athletics)

A total of eight hockey players, including four Canadians, are in the running for the 2017 NCAA Woman of the Year Award.

The award, established in 1991, honours graduating female student-athletes who distinguished themselves in academics, athletics, service and leadership during their college careers. A record 543 athletes have been nominated by NCAA member schools for this year's award.

Mercer led the Golden Knights to a national title in 2016-17, including scoring a pair of goals in Clarkson's 3-0 win over the Wisconsin Badgers in the championship final. She was also named as the 2017 Frozen Four's most outstanding player.

The Exeter, Ont. native was also a member of the Knights NCAA championship squad during her freshman season in 2014.

She finished her collegiate career as Clarkson's all-time leading goal scorer with 80 and second in points with 178 in 160 career games. Last season, she led the nation in goals (28) and tied for top spot in points (62) while being one of three finalists for the Patty Kazmaier Memorial Award as the top player in the nation.

Krzyzaniak, a native of Neepawa, Man., captained the Fighting Hawks over the past two seasons and is considered one of the top defencemen in the entire NCAA.

The Canadian Olympic hopeful finished her university career with 58 points (14G, 44A) in 139 career games.

Crossley, from Cole Harbour, N.S., played the past two seasons for the Terriers after transferring from New Hampshire. The Boston U captain and top defender finished her student-athlete career with 73 points (23G, 50A) while playing in 135 games over five seasons.

All three Division I stars have also played for Canada at various levels during their careers.

In four seasons with the Cardinals, she established NCAA Division III career records in both wins (75) and save percentage (.949) while ranking second in shutouts (30).

The four other puck performers up for the award are Kristin Lewicki of the DIII Adrian College Bulldogs and Gabrielle Schnepp of the DIII Utica Pioneers along with DI players Lee Stecklein of the Minnesota Golden Gophers and Lara Stadler of the Minnesota-Duluth Bulldogs.

The conferences will now select up to two nominees from which the selections committee will choose the top 30 nominees (10 from each division). From that list, the field will be narrowed to three finalists and then the 2017 winner will be named.

The top 30 honourees will be recognized and the winner announced during an award ceremony on Oct. 22 in Indianapolis.