CHL Scholarship Program Setting Players Up for Life After Hockey 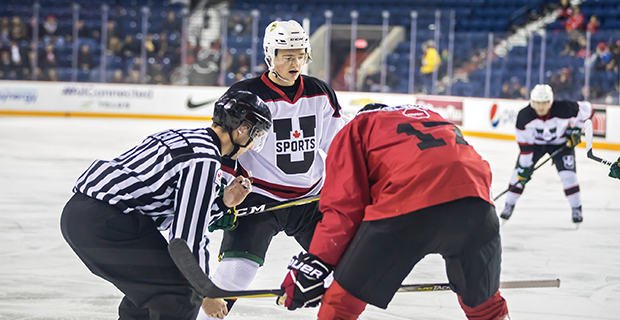 Twenty former CHLers suited up for Team U SPORTS at the 2017 All-Star Series against Canada's National Junior Team Prospects prior to the World Juniors. (Vivid Eye Photogrpahy)

The CHL experience couldn’t have gone any better for guys like Greg Gardner and Daniel Broussard.

They never reached the NHL, but like many players right now, they were fortunate to play long enough to get their education paid for once they moved on from major junior.

Gardner played the maximum five years in the WHL and then cashed in on a five-year education at the University of Alberta.

Broussard was a four-year OHLer who earned a business degree from the University of Guelph, thanks to his time served in the O.

They now hold key roles with their respective leagues when it comes to informing prospective players and their families about their leagues.

Gardner is director of operations and education services for the WHL and Broussard is the OHL’s director of player recruitment.

“I know what these kids are going through when they’re drafted and then making that decision whether to go pro or access their scholarship,” said Gardner, U SPORTS West’s outstanding student athlete in his final season in 2012-13.

“I just want to make sure they’re well informed and make the right decisions once they do leave the WHL.”

The number one goal for any high-level hockey player is to reach the NHL and for decades, the CHL has prided itself on being the largest producer of NHL players.

That’s what attracted Broussard to the league, even though he grew up in North Carolina and later Atlanta and his dad and grandfather both played NCAA basketball.

In North America, CHL teams are in constant competition with the NCAA when it comes to recruiting talent.

While many top players see the CHL as a fast track to the NHL, there are others who value the education the NCAA provides and knowing they’ll have more time to grow and develop through that route.

“The proof is in the pudding. We as a staff try to show that [the CHL is] the number one development league in the world,” Broussard said.

“It’s been consistent ever since I was recruited into the league. It’s about educating the top players that we are the destination.”

Still, Broussard points out that even if you’re not drafted into the NHL, educational costs to a postsecondary institution, whether it’s a university, college or trade school, are paid for once a player has moved on.

Scholarships from the CHL’s three umbrella leagues (OHL, WHL and QMJHL) provide players with a minimum of tuition, books and compulsory fees for every season they play in major junior.

Many of those players continue playing in the U SPORTS loop.

To help its players excel and make sure their educational needs are met, each CHL club has an academic advisor.

“We’re unique in the west because we have four different provinces and two different states where our players can play, so there’s a very good chance that a kid from Alberta, Saskatchewan or wherever is going to be changing provinces, maybe even changing countries to do high school,” Gardner said. “It’s definitely a difficult task our educational advisors are tasked with, but that’s what they’re there for.”

As well, education costs are covered if players opt to begin postsecondary education while still in the league, which many of them do nowadays.

Players not waiting until the end to take advantage
The clock is ticking on Stephen Gibson’s time in the OHL and he hasn’t given up on his dream of playing pro.

Nearing the end of his overage season with the Mississauga Steelheads, Gibson wasn’t drafted into the NHL, but did take part in the Columbus Blue Jackets’ training camp in 2016.

When he returned to the Steelheads, he ended that season as the Roger Neilson Memorial Award winner for being the OHL’s top university player.

“I value having multiple options in life because you never know what’s going to happen,” said Gibson, who earned a business management certificate from Ryerson University.

“I take pride in school. If you work hard at it, you can be successful.” 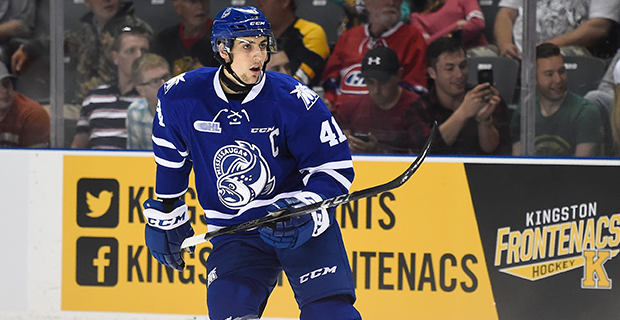 2016 OHL Scholastic Player of the Year and 2017 second round Vegas Golden Knights draft pick Nic Hague is studying part time at the University of Toronto Mississauga in between playing for the Steelheads. (Aaron Bell/OHL Images)

The Steelheads earned three out of the OHL’s six year-end academic awards over the last two seasons.

Damian Bourne was the Roger Neilson winner in 2015-16 while Nic Hague was the Scholastic Player of the Year that same season.

Drafted in the second round by the Vegas Golden Knights in the 2017 NHL Draft, Hague appears to have a promising NHL career ahead of him, but he still continues to study part time at the University of Toronto Mississauga.

“It’s a little bit different for me now that I’m not in high school, but (education isn’t) something we take lightly here in Mississauga,” Hague said.

“They’re always on me and I’m always on myself. If you don’t perform well in school, they won’t be happy either.”

Gibson has played parts of five seasons in the OHL and while he could potentially go on to study towards a degree at a postsecondary education without worrying about the financial burden, he hasn’t ruled out his chances of playing pro hockey.

Like any graduating player in the league, he would have an 18-month window in which he could give the minor pro route a try before cashing in on his education package. Many players have taken that route, but realized they’re better off getting an education.

“You’d be amazed how many players, within the first couple months of their pro careers, want to come back to school and use their education packages,” said Broussard, who had a full year of university studies under his belt while he was still in the OHL.

“(The minor leagues) are a grind, especially in the ECHL where there’s lots of bus travel and there’s teams all over middle America.”

Gardner went through that grind, playing in the ECHL for two years after his final year at the University of Alberta.

“You realize once you’re in your late 20s, that’s pretty old in the hockey dressing room.”

By the time his OHL career is done, Gibson hopes to have a full year worth of university credits under his belt.

The opportunity to complete university courses while playing is something players seem much more cognizant of now. As an example, Gardner points to a recent member of the Everett Silvertips who had gone through two full years of university while he was still in the league and was able to earn a degree, followed by a Masters through the WHL scholarship program.

You don’t have to be a star player in order to have a lot of options once your junior career is over. While the thought of juggling a postsecondary education with your hockey endeavours may sound daunting, Gibson assures his younger teammates that it isn’t.

“Sometimes we kid ourselves and think we have less time than we actually do,” he said.

“Maybe it just means not playing video games for an hour in the evening or whatever. Everyone can find some time.”

CSSHL prepares western players for what’s next
As they enter their respective major junior drafts, players have a lot to consider as it pertains to their future in hockey and life in general.

There’s advantages and drawbacks with both the CHL and NCAA routes that players need to consider.

With a strong foothold in Western Canada, the Canadian School Sports Hockey League tries to help players decipher all of that information while combining high-level hockey and education.

“Every situation is different, so you need to get all the information to make an informed decision,” said Chief Operating Officer Kevin Goodwin.

“We’re trying to give them that information before they’re bombarded by everyone else wanting them to go one way or the other.”

Born in 2009, the league now operates with 19 programs and nearly 70 teams (boys and girls) from Victoria to Winnipeg.

Most of the schools are based out of Alberta and BC and most of the games are scheduled over weekends in showcase formats to bring as many teams as possible to one location.

The league’s graduates includes notable young NHLers Curtis Lazar and Matt Dumba while highly regarded NHL prospects like Jake Bean, Dennis Cholowski and Michael Rasmussen have come out of the CSSHL too.

It’s pretty well scouted as Goodwin recalls being at a showcase in Saskatchewan one weekend and seeing representatives from every WHL team as well as several NCAA programs.

More importantly, the league believes in education first. While most minor hockey players’ grades are only monitored by mom and dad, Goodwin says the CSSHL goes well beyond that.

“Every program needs to have an academic advisor and they inform coaches, parents and billets if necessary,” he said.

“That’s four or five people with their finger on the pulse, which is great. It creates good habits for the kids.” 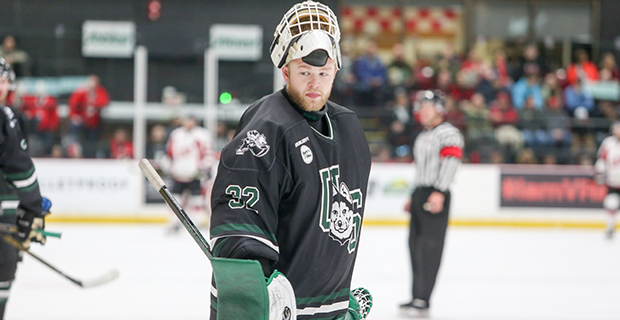 That’s a lot to be proud of for sure, but what he's most proud of is the university degree he's on track to obtaining.

“I know back in the day when I was playing junior, the only thing I ever wanted was to play in the NHL, but some things don’t work out the way you want them to, so you have to have a plan,” said the former Kelowna Rocket, now in his fourth year at the University of Saskatchewan, studying towards an economics degree.

“Looking back, this was probably the biggest and most critical decision I’ve made.”

The 24-year-old has quite the hockey resumé. He and Queen’s defenceman Spencer Abraham were the only players who suited up for the U SPORTS All-Stars against Canada’s World Junior hopefuls for a third straight year in December.

Cooke was considering the NCAA route as a lot of his friends have taken it, but he found out that not all of those scholarships covered 100 per cent of tuition.

“The biggest thing for me was I wanted to make sure I had all of my schooling paid for,” Cooke said. “That’s entirely why I went the Western Hockey League route. I don’t think there’s a better scholarship program than what the CHL has.”

Cooke says the biggest adjustment for him in university was time management. Although the Canada West Conference only plays 28 games compared to the WHL’s 72, there’s still a lot of things to keep him busy and there’s not as much time to complete homework as he thought there might be.

He has seen many players move on from U SPORTS to play professional hockey and he hopes to become one of them once he’s finished his education.

“For a goalie who’s 5-foot-10, getting an opportunity is very tough,” he said. “I’m just trying to get a degree, play as well as I can and once that’s done, I’ll hopefully have a pro career after.”

Originally published in our February Print Issue. Read it in our digital edition here.