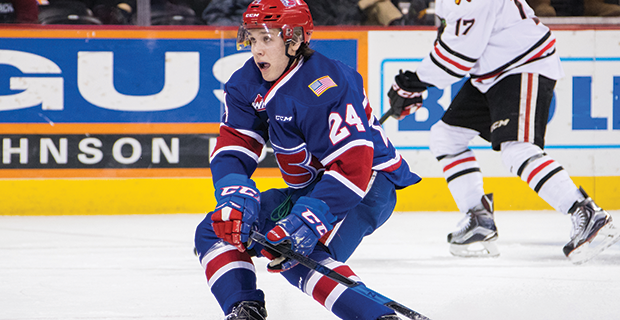 Ty Smith, D, Spokane Chiefs, WHL
Height: 5’11”
Weight: 170
Shoots: Left
Born: March 22, 2000 – Lloydminster, Alberta, Canada
Draft: 2015 WHL Bantam Draft – Round #1 (1st overall) by Spokane Chiefs
Ty Smith plays on a whole different level than most defencemen at his age. He is always on a swivel and does not panic to make a play. He is constantly scanning the ice for the best play available and makes that play without hesitation. Impressive transitions game moving from defence to offence and can skate up ice with a burst of energy leaving defencemen unsure of who to cover. Pure skater who is as smooth as they come with effective on-the-fly passing and decision making. High IQ and awareness of where he is on the ice and has confidence to skate the puck up ice or make a nice outlet pass. Will see all kinds of ice this season in key situations including special teams and PP QB. Keeps clear path for his goaltender and keeps his feet and stick active in passing lanes. Calming presence with and without the puck. Has a secret mean streak and only shows it at the right moment. 2015 HockeyNow Minor Player of the Year for Alberta.

2016-17 Season: In his first full WHL season, Smith played in 66 games for Spokane, netting 5 goals and 27 assists while racking up 22 penalty minutes. He finished -12 but completed the season high on the list for top 2018 WHL Draft eligible prospects for the NHL Draft. 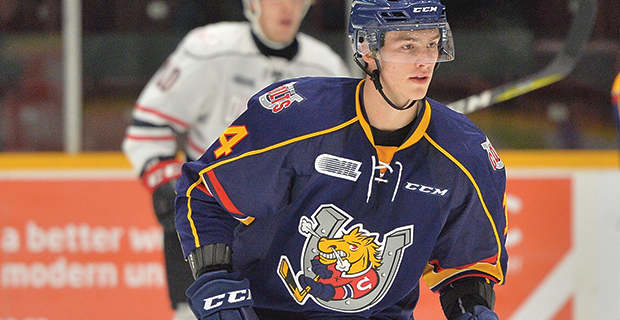 Andrei Svechnikov, RW, Barrie Colts, OHL
Height: 6’3”
Weight: 185
Born: March 26, 2000 – Barnaul, Russia
Draft: 2017 CHL Import Draft – Round #1 (1st overall) by Barrie Colts
Considered a preseason favourite to be a top 3 NHL Draft pick in the 2018 NHL Draft. Elite four-dimensional skater with an explosive first step. Stick handling is NHL calibre with many ways to keep the puck away from defence. Pinpoint accuracy with his shot and can find any opening and find a way to get the puck in those holes. Deceptive release and handcuffs goalies by shooting through screens and is able to get off a shot in full stride. Speedy and elusive when he skates to the outside, keeping defenders off balance and vulnerable. Ultra competitive and works extremely hard to win puck battles all over the ice. Exposes weaknesses of defenders by forechecking hard and chasing the play in all three zones. A dangerous mix of skill, IQ and a competitiveness that he brings to the game every night.

2016-17 Season: Svechnikov skated for the Muskegon Lumberjacks in the USHL and was named USHL Rookie of the Year after posting 29 goals and 29 assists in 48 games. He finished with 68 penalty minutes and a +/- of +29. He also posted 8 goals and 12 points in the World Jr. A Challenge for Russia. 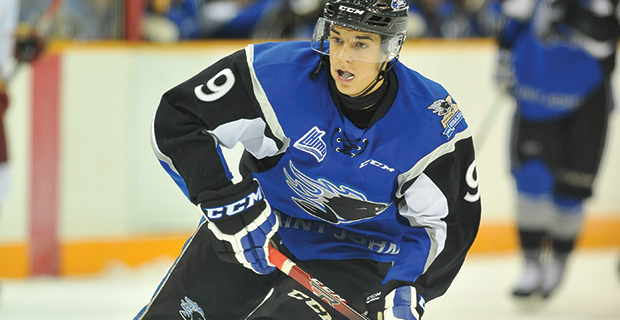 Joe Veleno, C, Saint John Sea Dogs, QMJHL
Height: 6'1"
Weight: 189
Shoots: Left
Born: January 13, 2000 – Montreal, Quebec, Canada
*Granted Exceptional Player Status by Hockey Canada in 2015
Draft: 2015 QMJHL Draft – Round #1 (1st overall) by Saint John Sea Dogs
Veleno was recently named Captain for the defending champion Sea Dogs and starting his third full season in the league. He is a standout skater who mixes speed and acceleration with real good direction changes and transfers his height very well on his edges. He has a tremendous work ethic and makes others around him better players. Leadership qualities are obvious every game he is always teaching. Will always win one-on-one battles as he is real tough to knock off the puck in full stride. Dynamic two-way player who is responsible in his own zone and loves to rush the puck and make plays. Uses his speed to skate through gaps before they close and uses his strength to dig pucks loose and get the puck to the net. The last two seasons he was surrounded by some real good players but they have moved on and the team is now Veleno's to take and run with.

2016-17 Season: Veleno played in 45 games, scoring 13 times and adding 27 assists with minimal time in the penalty box with only 18 penalty minutes. During the march to the Memorial Cup, Veleno posted 8 goals and 11 points in 18 postseason games.