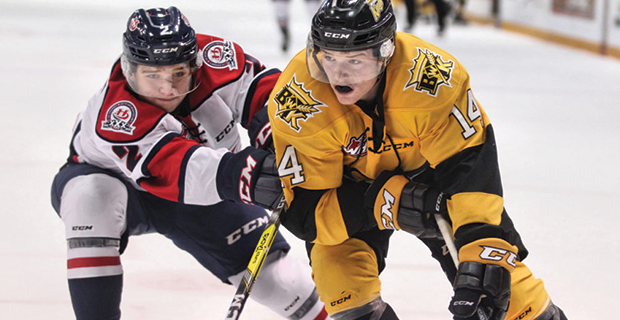 Courtesy of the Brandon Wheat Kings


Ty Lewis, LW, Brandon Wheat Kings, WHL
Height: 5’11”
Weight: 185 lbs.
Shoots: Left
Born: March 5, 1998 – Brandon, Manitoba, Canada
Draft: 2013 WHL Draft – Round #3 (47th overall) by the Brandon Wheat KingsTyLewis relishedin his role with the team this year, scoring 30 goals and 68 points in 70 games while Nolan Patrick was on the shelf much of the season. Has a very sneaky shot and a deceptive release. Strong on the forecheck and is a pest around the net. It takes home a few strides to get going but once he goes, he never stops going. Will skate through checks and not let defencemen get in his way. Is quick to jump on loose pucks in the crease and create a scoring chance. Quick instincts and always keeps his feet moving. Consistent on special teams as much of his offensive production has been on the power play. His five-on-five play needs some work if he wants to be a good all-around player.

DID YOU KNOW? Lewis is another talented re-entry in this year's NHL Draft after an injury plagued draft season in 2015-16 and saw him dress in only 48 regular season games and post just 10 goals and 23 points (compared to his 30 goals and 68 points in 70 games played this past season). He had a regular shift in the Wheat Kings run to the WHL Championship, scoring two goals in 24 games that included the MasterCard Memorial Cup. 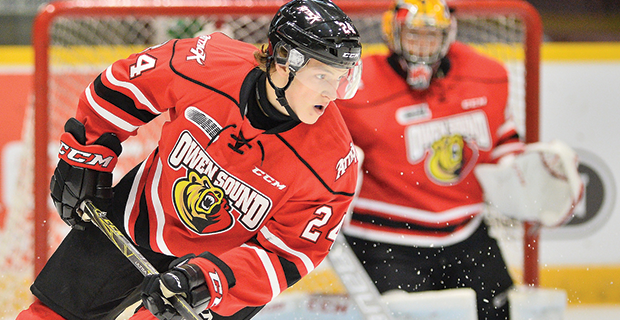 
Maksim Sushko, RW, Owen Sound Attack, OHL
Height: 6’0”
Weight: 185 lbs.
Shoots: Right
Born: February 10, 1999 – Brest, Belarus
Draft: 2016 CHL Import Draft – Round #1 (29th overall) by the Owen Sound Attack
Maksim Sushko surprised many with his standout rookie season in the OHL and provided strong secondary scoring depth with 17 goals and 32 points in 54 games. Has tremendous vision on the ice and thinks the game at the NHL level. Strong along the perimeter and gets into good position on the power play. Quick, crisp passes on the tape and likes to get involved in the offensive attack. Strong on the puck pursuit and has good speed fighting for every inch of ice he can get. Tends to drift out of the play when the puck is in the defensive zone and needs to work on his two-way game and stay engaged in the play every second he is on the ice. It still remains unseen if he will turn into a true sniper and a dynamic playmaker.

DID YOU KNOW? Sushko put up nine goals and 30 points in 21 games for Shakhter Soligorsk-2 of the Belarus-2 League, adding three goals and 13 points in the postseason and leading his team to the league Championship. He is also a 2016 first round draft pick (11th overall) of Dynamo Minsk in the KHL. 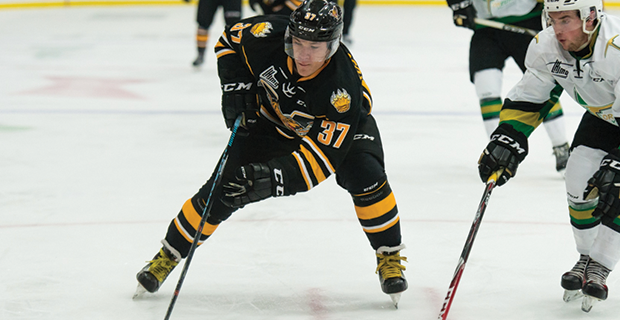 
Ivan Kosorenkov, RW, Victoriaville Tigres, QMJHL
Height: 6'0"
Weight: 189 lbs.
Shoots: Left
Born: January 22, 1998 – Nizhnekamsk, Russia
Draft: 2016 CHL Import Draft – Round #1 (24th overall) by the Victoriaville Tigres
Undersized but competitive Russian winger Ivan Kosorenkov flew under the radar most of the season and turned in an impressive finish to his rookie season by scoring 34 goals and 63 points in 68 games. Was considered a passenger much of the first half of the season but turned it on in the second half and really impressed with his ability to take over the game. At times he needs to not try to do it all by himself and use his linemates more but really started to pick up on his own mistakes and worked real hard to improve. Quick feet down low and creates space for himself effectively. Always in the right place at the right time and scored 25 power play points and six game winners. Showed much more consistency and his ability to take over the ice during the postseason, scoring two goals and four points but falling to Chicoutimi in 4 games.

DID YOU KNOW? Spent the 2015-16 season playing for MHK Spartak Moskva in the MHL, scoring five goals and seven points in 11 games. He also scored 13 goals and 20 points playing for the U18 Russian team in the MHL. Took part in the U19 World Jr. A Challenge for Russia scoring 2 goals in 4 games.