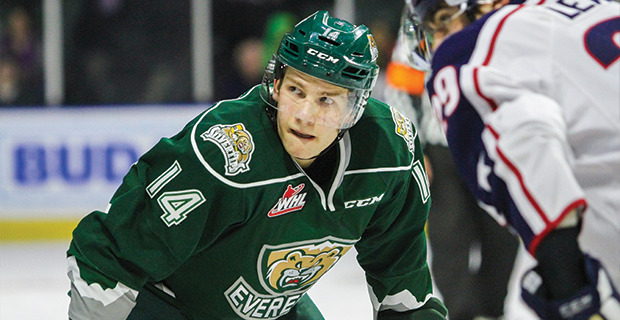 Riley Sutter, RW, Everett Silvertips, WHL
Height: 6’3”
Weight: 205 lbs.
Shoots: Right
Born: October 25, 1999 – Calgary, Alberta, Canada
Draft: 2014 WHL Draft - Round #6 (125th overall) by Everett Silvertips
Sutter comes from a long line of hockey players. Entering his third season with Everett, Sutter is coming off a 20-goal season that saw him get 11 of those on the power play. His long reach gives him the ability to poke pucks loose and keep the puck away from defencemen. Likes to play inside the dots and collect passes and get off a shot quickly. Good two-way player who calls himself a playmaker but the loves to shoot. Good anticipation gives him the edge to get in front of defenders and gain advantage of space in front of the net and around the crease. Does a good job of opening up space for himself and getting open. Has good physical size but is rarely seen engaging in any physical play but it will continue to grow along with him.

2016-17 Season: Sutter finished his first 20-goal season as an underager last season while adding 19 assists in 67 games. Saw time on first power play unit and proved he can clean up the play in front of the net and put the puck in the back of the net. 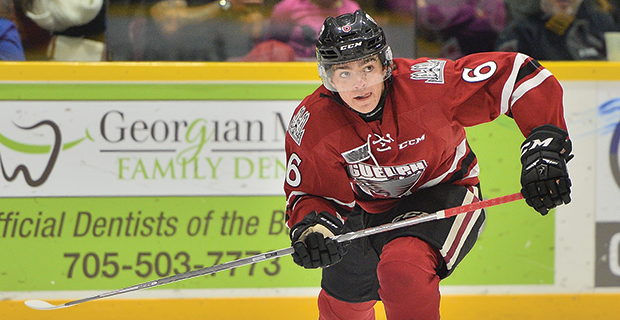 Ryan Merkley, D, Guelph Storm, OHL
Height: 5'11"
Weight: 163 lbs.
Shoots: Right
Born: August 14, 2000 – Mississauga, Ontario, Canada
Draft: 2016 OHL Draft – Round #1 (1st overall) by Guelph Storm
Dynamic skater who can be found all over the ice and despite his size, is a highly skilled offensive defenceman. An elite passing defenceman who is the point man on the Storm PP. Does his job from the point and has above average offensive instincts. Rarely caught standing still and loves to jump in the offensive rush. Good coverage one-on-one and makes it looks easy by breaking up plays and transitioning to offence right away. Needs to work on his play deep in his own end and especially winning the battles in front of the net. Not physically strong enough to contain and move big forwards from the crease. Has good hard shot and loves to shoot the puck from anywhere on the ice and has the capability of being an elite offensive defenceman in the 2018 NHL Draft class.

2016-17 Season: Merkley led all OHL rookies with 55 points in 62 games, scoring 12 goals and 43 assists to earn OHL Rookie of the Year honours. His point totals positioned him eighth overall among all OHL defencemen. His 55 points were the most by a 16-year-old since former Storm forward Jeff O'Neill scored 79 in 1992-93. 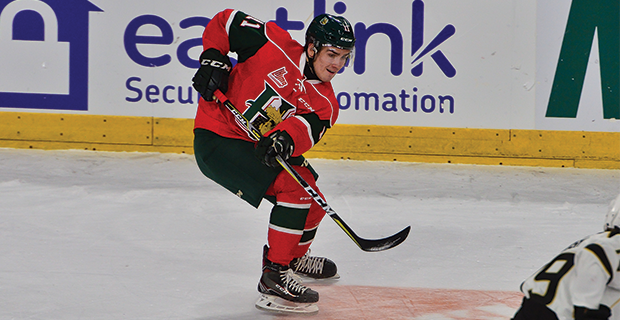 Filip Zadina, LW, Halifax Mooseheads, QMJHL
Height: 6'0"
Weight: 190 lbs.
Shoots: Left
Born: November 27, 1999 –Pardubice, Czech Republic
Draft: 2016 CHL Import Draft – Round #1 (4th overall) by Vancouver Giants
2017 CHL Import Draft - Round #1 (11th overall) by Halifax Mooseheads
Dangerously gifted offensively and has dynamic offensive instincts. Very smart in all three zones and has tremendous offensive upside. Has adjusted well to the smaller North American rinks and is the most talented forward on a Halifax team that has plenty of draft eligible talent. Plays hard every shift and is a highly competitive winger who seems to gain energy as the game goes on. Skating is strong and does a good job cutting and darting his way through traffic. Skates hard into the offensive zone beating defenders and driving to the net. Steps up his game in big moments and is capable of scoring the big goal when the game is on the line. Has good hands in close with a good release who is already having success on the first power play unit in Halifax.

2016-17 Season: Originally drafted by Vancouver in 2016, Zadina stayed in the Czech Republic and had quite the season internationally leading the U-18 Czech team with 20 goals and 31 points in 22 games. He then led the Czechs to their first ever Ivan Hlinka Gold medal, scoring three goals and six points in five games.