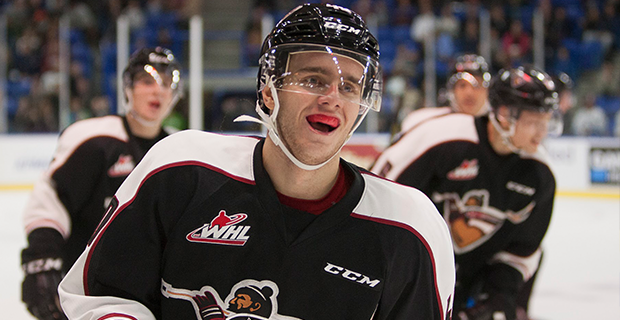 
Milos Roman, C, Vancouver Giants, WHL
Height: 5’11”
Weight: 187 lbs.
Shoots: Left
Born: November 6, 1999 – Kysucke Nove Mesto, Slovakia
Draft: 2017 CHL Import Draft - Round #1 (6th overall) by Vancouver Giants
Roman was brought into Vancouver to see time as a second line centre and add scoring depth but has proved to be much more than that early this season. Roman is slotted in between WHL veterans Brad Morrison and Ty Ronning and has excelled feeding them the puck on a team starved for scoring. He shows up every shift and is a dynamic two-way player that is aggressive on the forecheck causing turnovers. Sees time on both special teams units and is a pass first centreman. When he shoots, he does so with accuracy.  Not a speedster but a balanced skater and is capable of playing well in all three zones. A little timid in the corners but can makes things happen with the puck on his stick.

2016-17 Season: Represented Slovakia internationally at the U-18 tournament scoring a goal and adding an assist in five games. He also played four games in the U-20 World Juniors posting two points. Additionally he played in the Ivan Hlinka Tournament for the second straight season and recorded five assists in four games played. 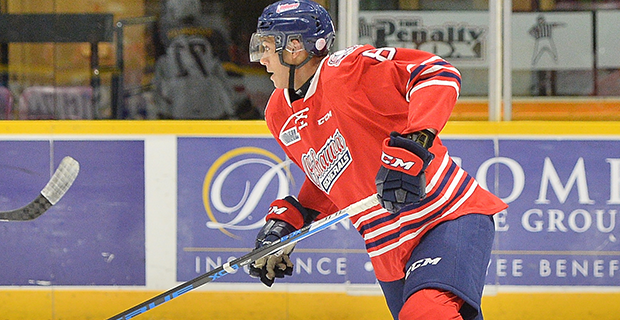 
Serron Noel, RW, Oshawa Generals, OHL
Height: 6'5"
Weight: 203 lbs.
Shoots: Right
Born: August 8, 2000 – Ottawa, Ontario, Canada
Draft: 2016 OHL Draft – Round #2 (25th overall) by Oshawa Generals
A big presence on the ice in both skill and intimidation. Power forward who loves to be in your face and not afraid of anything. Fast riser in the rankings, he is given as much space as he needs due to his size and strength around the net. Extremely mobile for a big kid and has a goal scoring touch. In a good position every shift and works real hard on the forecheck and forces turnovers. Will always finish his checks and compliments his physical play with above average hockey IQ  and good hands around the net. Carries a hard, heavy and fast shot. Works the cycle down low and then will work the perimeter and cut hard to the net. Hard to knock the puck off his stick and once he develops his lower body strength, he will be force every shift.

2016-17 Season: Played in 63 games as a rookie scoring 8 goals and 21 points. He also added 52 penalty minutes to his stats which was good for seventh among rookie skaters. He also contributed three points in nine playoff games. Dressed for Canada in the U-17 tournament posting one goal and four points in five games adding 15 penalty minutes. 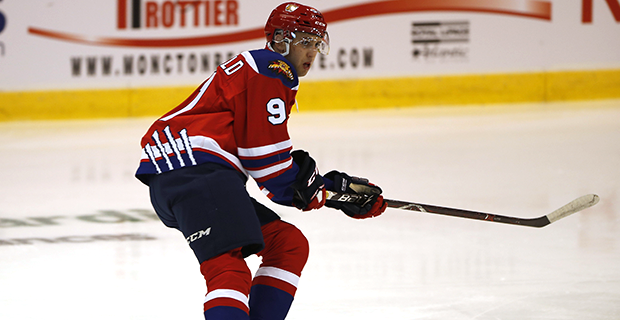 Anderson MacDonald, LW, Moncton Wildcats, QMJHL
Height: 6'2"
Weight: 195 lbs.
Shoots: Left
Born: May 16, 2000 –Quispamsis, New Brunswick, Canada
Draft: 2016 QMJHL Draft – Round #1 (10th overall) by Sherbrooke Phoenix
Big, strong presence on the ice and especially around the net. Uses his size and strength to gain position in front and maintain his space wreaking havoc for defenceman and goalies. Will jump on rebounds and win puck battles anywhere below the dots. Also has real soft and quiet hands for a big kid. Can stickhandle his way out of traffic and sets himself up nicely in good shooting lane. Attracts defenceman to him creating open space for his linemates. He can handle a pass on the fly using his long reach and play the dump and chase game. Skates hard to the net and often wins puck pursuits. Good zone entry and plays with a chip on his shoulder. Knows his role on he power play - park himself in front and clean up the rebounds.

2016-17 Season: MacDonald dressed in 50 games for Sherbrooke scoring 29 goals and adding 12 assists placing him third in rookie goals scored and in the top 10 in overall rookie scoring with 41 points. He also dressed for Team Canada White in the World Hockey Challenge U-17 and chipped in with two assists in six games. He asked for a trade out of Sherbrooke following the season and was dealt to Moncton in the off-season.