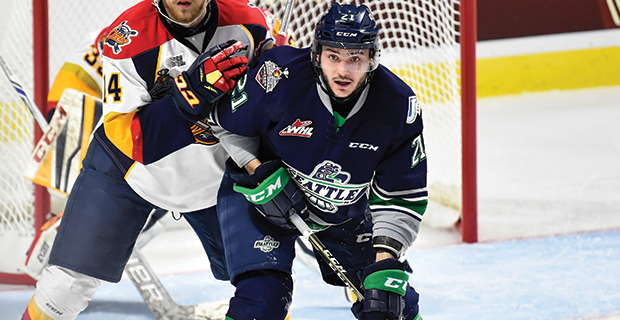 
Matthew Wedman, C, Seattle Thunderbirds, WHL
Height: 6’3”
Weight: 196 lbs.
Shoots: Left
Born: May 25, 1999 – Edmonton, Alberta, Canada
Draft: 2014 WHL Draft – Round #2 (38th overall) by the Seattle Thunderbirds
Wedman is a tall, lanky kid who has found a knack for going hard into the corners and crashing and banging. He has not quite found his scoring touch and at times doesn’t look comfortable in his own skin, but has the making of a power forward. He has shown flashes of his power with a heavy presence, mixing it up in front of the net. He is quick to get to the puck and provides a big screen in front of the goalie. He is a choppy skater and is still looking for consistency. He will go long stretches on the bench, then get out on the ice and score a goal, then won’t see a shift for another 10 minutes. He needs to develop more upper and lower body strength to fill the scoresheet and compete on a more regular basis.

DID YOU KNOW? As an underage skater in his rookie season, his shining moment was in the 2016 Western Conference Finals where he scored the OT goal at home in Game 4 against Kelowna, sending the T-Birds to the WHL Finals vs Brandon after sitting on the bench for nearly three periods. 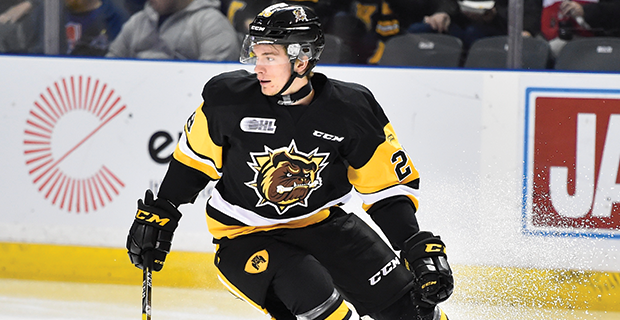 
Marian Studenic, RW, Hamilton Bulldogs, OHL
Height: 6’0”
Weight: 165 lbs.
Shoots: Left
Born: October 28, 1998 – Holic, Slovakia
Draft: 2016 CHL Import Draft – Round #1 (11th overall) by the Hamilton Bulldogs
The first season in North America for Studenic was a very successful one as he stepped into a top six role right away and ended the season with 18 goals and 30 points while taking 128 shots. He added 4 points in 7 playoff games. Very quick on his feet and tremendous acceleration. Can create offensive opportunities out of nothing and has the ability to take possession of the puck below the goal line using his determined and motivated work ethic. Has the makeup of a beanpole, tall and lanky but is wiling and likes to battle hard. Has above average playmaking abilities. Needs to put a lot more weight on the next few seasons to make any kind of impact at the next level. 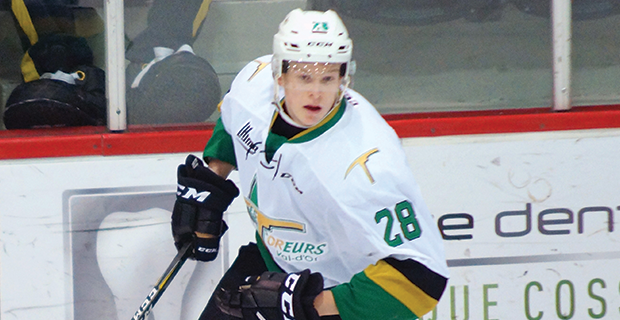 
David Noel, D, Val-D'Or Foreurs, QMJHL
Height: 6’1”
Weight: 170 lbs.
Shoots: Left
Born: April 10, 1999 – Quebec City, Quebec, Canada
Draft: 2015 QMJHL Draft – Round #2 (34th overall) by the Chicoutimi Saguenéens
Noel can bring sandpaper to the lineup and can hurt the opposition on the power play and kill penalties. Has shown a definite toughness in his game and likes to shoot the puck in al situations. Scored 11 goals as a rookie in the QMJHL adding 21 assists in 65 games split with Chicoutimi and Val-d'Or. Not afraid to play physical and drop the gloves. Hard shot from the point but not always accurate. Physically strong upper body but lower body strength needs to improve for his skating to be effective.