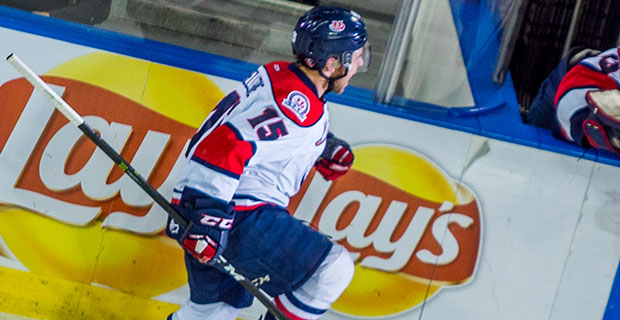 Jordy Bellerive, C, Lethbridge Hurricanes, WHL
Height: 5'10”
Weight: 194 lbs.
Shoots: Left
Born: May 2, 1999 – North Vancouver, British Columbia, Canada
Draft: 2014 WHL Draft – Round #1 (2nd overall) by the Lethbridge Hurricanes
Jordy Bellerive is a real high energy player who puts everything into every shift he takes. He had a bit of a drop off as far as overall skill goes as the season wore on but still had a steady climb in point production compared to one year ago. A real sniper who visualizes the best play to make with the puck on his stick. Likes to shoot and will do a lot of it. Likes to fake shots to make goaltender move and then pass the puck giving his line mate a clear shooting lane. Would like to see him go into scoring areas more often but he likes to pass in these areas and then gets himself open in the slot. Likes to get under the skin of opponents and disrupt any momentum they may have. Skating has improved and has good acceleration and mobility with crossovers through the neutral zone on the breakout. Strong and built for competitive and steady climb through any NHL system

DID YOU KNOW? Bellerive made an impact at the Bantam level playing for the North Shore Winter Club posting consecutive 60+ goal and 100+ point seasons. Prior to reporting to Lethbridge, played in the CSSHL with Okanagan Hockey Academy and scored 34 goals and 49 points in 27 games. His older brother Matt played 285 games in the WHL with Vancouver, Red Deer and Kamloops. 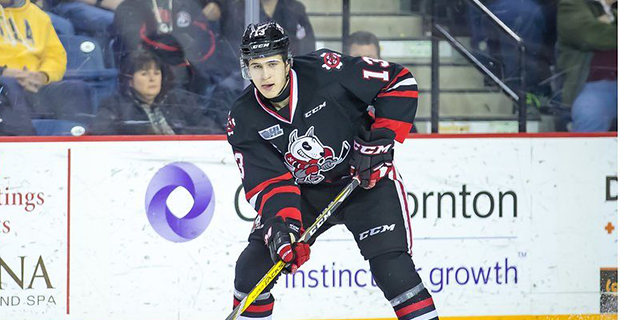 
Kirill Maksimov, RW, Niagara IceDogs, OHL
Height: 6’2”
Weight: 190 lbs.
Shoots: Right
Born: June 1, 1999 – Concord, Ontario, Canada
Draft: 2015 OHL Draft – Round #2 (38th overall) by the Saginaw Spirit
Not a flashy player by any means but has displayed a renewed confidence after being traded from Saginaw to Niagara midway through the season. Seems to be in the right place at the right time and has been given more opportunity to display skill set with Niagara. Has good hands around the net and is deceptive with the puck. Good size down the wing and will drive the puck to the net from the outside. Long reach and decent speed battles down the wing. More consistent play on the power play and started to show improvement on the defensive side of the ice. Has a good shot but didn't nearly shoot as much as he should have. Seems to be something missing from his offensive ability that will always leave you wanting more.

DID YOU KNOW? Maksimov was born in Ontario, giving him dual citizenship of Canada and Russia. Due to his participation internationally with Russia, he is considered a Russian for all IIHF sanctioned tournaments. He played his minor hockey in Ontario for the Toronto Jr. Canadiens, scoring 16 goals and 33 points in 28 games in 2014-15, when he also scored four points in six games at the OHL Cup. 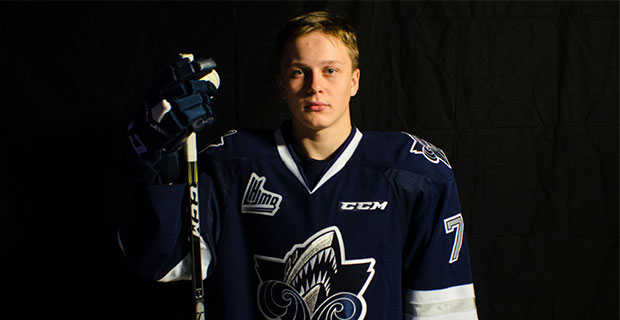 Denis Mikhnin, RW, Rimouski Oceanic, QMJHL
Height: 5'10”
Weight: 169 lbs.
Shoots: Left
Born: July 11, 1999 – Kirov, Russia
Draft: 2016 CHL Import Draft – Round #1 (33rd overall) by the Rimouski Oceanic
Denis Mikhnin displayed an impressive skill set early in the season and quickly adapted to the pace of play in North America. Good hands in tight around the net and can dance around defenders at the blue line. Quick release and likes to shoot on the rush using all shot types including a deadly snap shot and wrist shot, and he’s not afraid to go to his backhand. Scored a hat trick in the early going of the season that seemed to give him confidence moving forward. Plays a feisty game but will rarely mix it up and will not go into the corners with a big defenceman. Has a scoring ability on the power play and will only improve his play away from the puck as he gets more ice time. Finished the season with 20 goals and 39 points in 59 games; good for 12th in QMJHL rookie scoring race.

DID YOU KNOW? Mikhin won a bronze medal with Team Russia at the World Jr. A Challenge this past December in Bonnyville, Alta. Mikhin scored a goal in the bronze medal game and finished with the one goal in four games adding a minor penalty to his stats.