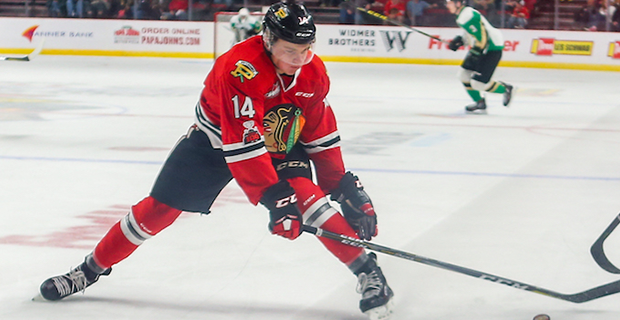 
Jake Gricius, C, Portland Winterhawks, WHL
Height: 6’3”
Weight: 188 lbs.
Shoots: Left
Born: October 13, 1999 – Colorado Springs, Colorado, USA
Draft: Portland Winterhawks Protected List (June 2016) SIGNED: July 2016
He has shown improvements in all aspects of his game and came into training camp bigger, stronger and confident of his place on the team. He has been shifted around the third and fourth line on a deep Portland team that has a talented group of centres but he can slot into a scoring winger on one of the top two lines.  He is strong on face offs, not afraid to get to the net and has shown a big improvement in his skating ability. A quicker stride and a fearless drive to make plays happen. Has a quick release and is accurate with the his wrist shots from in close. Moves well for a big kid and fights through forecheckers to get a shot off. Tough to win puck battles against him down low and he shows determination and strength in any area in the rink. Still looking for consistency this season.

2016-17 Season: Skated in 71 games for Portland skating on primarily the fourth line with fellow rookies and 2018 NHL Draft Eligibles Lane Gilliss and Brad Ginell. He finished the season with 10 goals and 14 points and dressed in all 11 Winterhawk postseason games posting two assists. 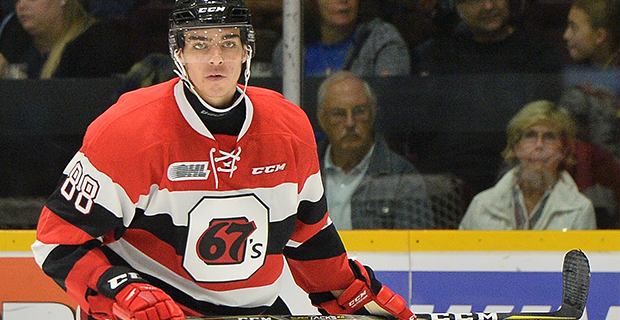 
Kevin Bahl, D, Ottawa 67's, OHL
Height: 6'6"
Weight: 230 lbs.
Shoots: Left
Born: June 27, 2000 – Mississauga, Ontario, Canada
Draft: 2016 OHL Draft – Round #2 (31st overall) by Ottawa 67's
Huge blue liner has seen his confidence shoot through the roof this year and has been really impressive this season. He can assess a situation and react accordingly. Not the fastest skater but good mobility and keeps up with the play well for a kid his size. Not phased by pressure forecheckers and shows patience with the puck. Seals the wall and likes to chip in offensively and has underrated offensive skills. Skates well in the offensive zone moving off the line and pinching along the wall. Moves in front of the net on the Power Play and creates huge problems for goaltenders to see. Will also park himself in the slot and make it difficult for defenseman to move him. Would like to see a more intimidation factor from him and gain more confidence in his physical play.

2016-17 Season: Bahl was a top pairing defenceman as a 16-year-old and saw action in 57 games. Only scored one goal and four points and finished with a +/- of -14. Saw action in all six first round playoff games vs. Mississauga. Played in the WHC Under 17 tournament for Canada and had an assist in six games. 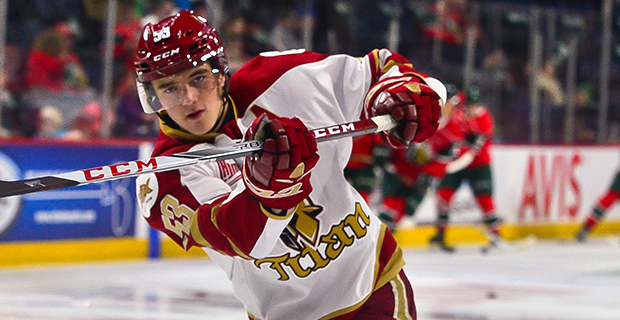 Noah Dobson, D, Acadie-Bathurst Titan, QMJHL
Height: 6'2"
Weight: 170 lbs.
Shoots: Right
Born: January 7, 2000 –Summerside, PEI, Canada
Draft: 2016 QMJHL Draft – Round #1 (6th overall) by Acadie-Bathurst Titan
Tall, lanky workhorse seems to never leave the ice. Counted on for his dynamic defensive zone skill set and keeping forwards out of the middle of the ice with his big wingspan. Covers a lot of ice with his long stride and four way mobility. Active stick in passing lanes and easily breaks up cross ice passes. Makes decisions quickly and doesn't waste any time with the puck on his stick. Mobile puck distributor and always sends a clean crisp pass up ice. Has a cannon of a shot and loves to shoot. He can be a threat when he skates the puck along the perimeter and draws attention to himself giving him a lane to send the puck to a teammate. Earned himself a leadership role this season by wearing an "A". Good communicator on the ice and can be seen talking a lot to his forwards. Versatile and can play both sides of the blue line. Separates the puck from well and does take the body but is not quite physically developed to play a punishing physical game. Sees plenty of action on both power play and penalty kill.

2016-17 Season: Skated in 63 games as a rookie and posted seven goals and 26 points which put him in the top 5 for rookie defenceman scoring. Finished the playoffs with five assists in 11 games. Dressed for Canada Red at the WHC Under 17 and finished with 2 penalty minutes in five games.