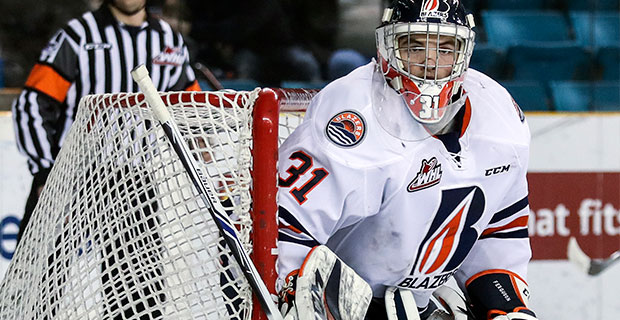 
Dylan Ferguson, G, Kamloops Blazers, WHL
Height: 6’2”
Weight: 195 lbs.
Shoots: Left
Born: September 20, 1998 – Lantzville, British Columbia, Canada
Draft: 2013 WHL Draft – Round #8 (166th overall) by the Kamloops Blazers
Kamloops backup goalie Dylan Ferguson stepped up and turned in a very impressive December and January with undisputed starter Connor Ingram off at the World Juniors. Ferguson was named WHL Goaltender of the Month of December and posted a 6-3-0-1 record with a 2.44 GAA and a sparkling .933 save %. He posted multiple game 40+ saves and even won himself starts into January with Ingram on the bench. Ferguson is a sturdy goalie at 6’2/195 who covers the net well and has an above average glove hand with quick reflexes and good cross crease movement. Has developed good rebound control and sees the puck well through traffic. Has the size and compete level most NHL teams desire.

DID YOU KNOW? Ferguson chose to move away from home and play for the Notre Dame Hounds rather than the North Shore Winter Club. It’s a decision that paid off for him as he was drafted into the WHL after three seasons in Wilcox, Saskatchewan playing for the Hounds Midget AAA program. 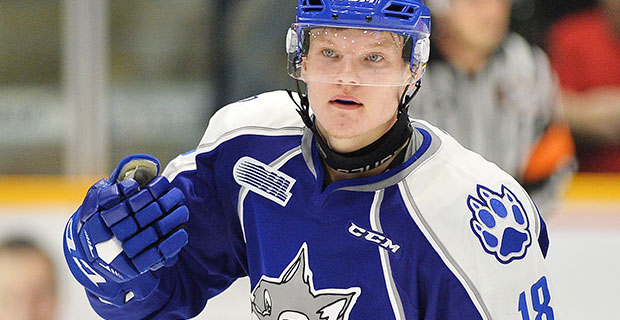 
Macaulay Carson, LW, Sudbury Wolves, OHL
Height: 6’1”
Weight: 210 lbs.
Shoots: Left
Born: March 12, 1999 – Midhurst, Ontario, Canada
Draft: 2015 OHL Draft – Round #2 (41st overall) by the Sudbury Wolves
Carson fits the description of a power forward to a tee. Physically strong and a strong lower body enables him to hold his position in front of the net and hardly gets pushed around in front of the net. A real tough competitor in the corners who rarely loses a puck battle. Has a good efficient skating stride and is a real hard worker down low. Will do everything he is asked to do on the penalty kill and on the power play. Does a good job of plugging the passing lanes on the PK. He goes in to the dirty areas and capitalizes on creating turnovers with his offensive physical presence. He is not afraid to drop the gloves and get under the skin of opposing players. A steady rise up the rankings this season as he has made his presence known all season long.

DID YOU KNOW? Carson could be singled out as the piece the Wolves needed to right the ship this season.  After recording only 5 goals and 11 points his rookie season in 2015-16 and the Wolves missing the playoffs, Carson was a 30-goal scorer and 50-point man, helping the Wolves make the postseason this spring. 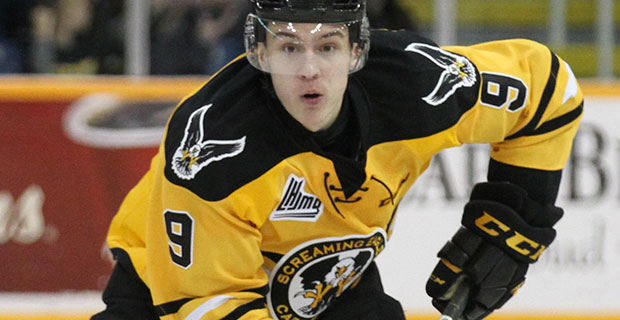 
Leon Gawanke D, Cape Breton Screaming Eagles, QMJHL
Height: 6’1”
Weight: 179 lbs.
Shoots: Right
Born: May 31, 1999 – Berlin, Germany
Draft: 2016 CHL Import Draft – Round #2 (96th overall) by the Cape Breton Screaming Eagles
Gawanke is an offensive defenceman who has been a steady point producer all season long. He likes to shoot and has been relied on to run the Cape Breton PP. Has a very accurate shot but not real heavy and hard. He uses his tall and lanky frame to keep his stick moving in passing lanes and break up neutral zone passes. Does a good job on the breakout and delivers a crisp pass and will head up ice. He likes to pinch but can get him into trouble if he picks the wrong time to pinch. Needs to be stronger defensively in his own end and tends to shy away from physical play.

DID YOU KNOW? Gawanke scored 11 goals and 35 points as a 16-year-old playing for former NHL defenceman Uwe Krupp for Berlin in the DNL Junior League in Germany during the 2015-16 season. He was also named playoff MVP and went on to be the only ’99 born player to play for Germany at the U18 World Championships.